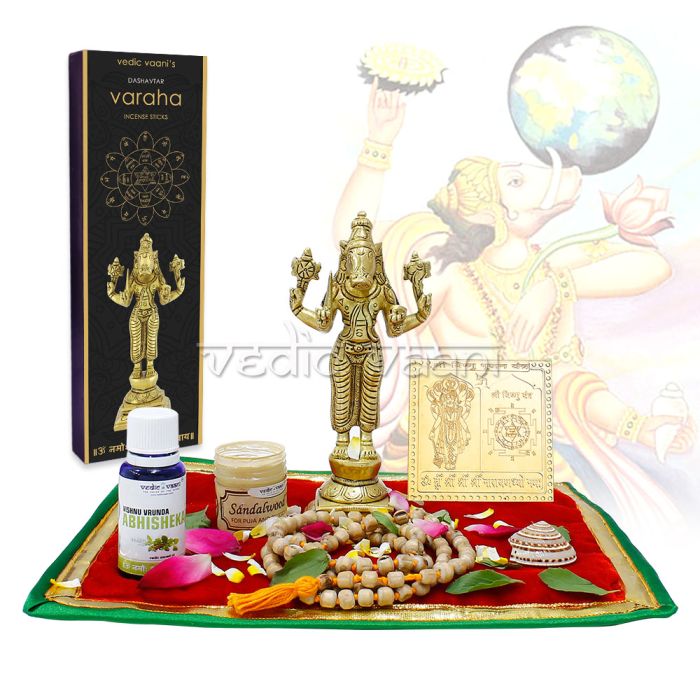 $281.82
Be the first to review this product
In stock
SKU
BS147
Quick Overview

Varaha was the third Avatar of Vishnu in Hinduism. Varaha may be depicted completely as a boar or in an anthropomorphic form, with a boar's head and human body. The rescued earth lifted by Varaha is often depicted as a young woman called Bhudevi. The earth may be depicted as a mass of land balanced on his tusk.

Once the four sons of Lord Brahma visited Vaikunt, the abode of Lord Vishnu to pay their respect and seek his blessings. The two guards of Vaikunt namely Jaya and Vijaya had grown proud over time and they denied entry to the four sages without a reason. To teach them a lesson and put them in the right track, the four sages cursed that they shall lose their position and be born on the earth.

When Jaya and Vijaya realized their mistake, they pleaded for pardon and the curse was revised that they shall be born thrice on the earth as demons and shall be killed by Vishnu every time upon which they shall attain their original status as the guards of Vaikunt once again.

In their first birth, they were born as Hiranyakashyap and Hiranyaksha. Upon their birth, all the three worlds shook as though there were strong tremors. Indra was terribly afraid and approached Lord Vishnu. The Lord assured Indra that when the time was ripe, he would kill the demons and save all the worlds.