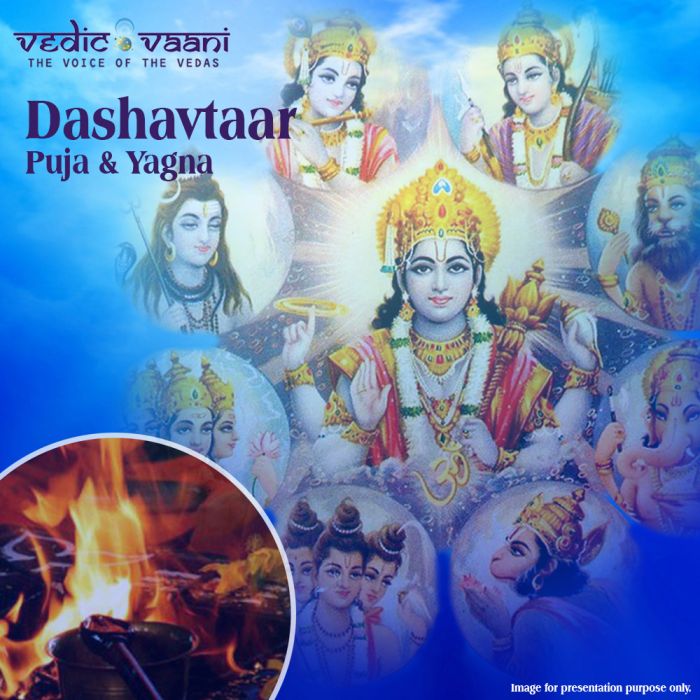 $297.73
Be the first to review this product
In stock
SKU
PS127
Quick Overview

The first four incarnations of Vishnu appeared in Satya or Krita Yuga, the first of the four Yugas, also called 'The Golden Age'.

The Dashavatara refers to the ten  complete incarnations- avatars of Vishnu, the Hindu god of preservation which has Rigvedic origins. Vishnu is said to descend in form of an avatar to restore cosmic order.called 'The Golden Age'. The next three appeared in Treta Yuga, the eighth and ninth in Dwapara Yuga and the tenth will appear in Kali Yuga.

Benefits Of Dasa avatar vishun puja:
1.Brings the divine grace of Lord vishnu in ones life.
2.Brings peace,prosperity ,health and well being.
3.Cures diseases and ailments and improves their earthly lives.
4.Purification of soul and mind.

Vedic Vaani priests will perform Puja & yagna as per vedic rituals based on birth details. The Puja prasad, energised Rudraksha and photos will be sent to you through courier. Please mention your birth details (name, date, time, place) & Sankalp (wish) at checkout. This is a individual yagna (you may do puja on individual name or include your near and dear ones in the puja). You will be provided with the contact no. of the priest, to call during the sankalpa/yagna. Know more about our exclusive Puja Services.