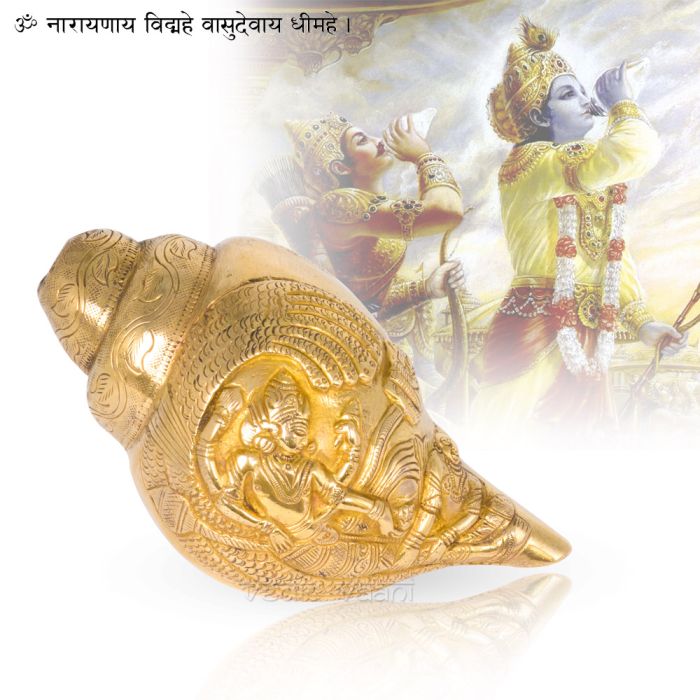 $177.27
Be the first to review this product
In stock
SKU
SK03
Quick Overview

Very rare metal shankh that can be blown.It has the image of Lord Vishnu and Goddess Laxmi’s lying on Sheshnaag. The shankha is a sacred emblem of the Hindu preserver god Vishnu. Made in heavy shining brass.
Dimensions: 3 inches (W) x 6.25 inches (L)
Weight: 1.3 kgs

Very rare metal shankh that can be blown.It has the image of Lord Vishnu and Goddess Laxmi's lying on Sheshnaag.

The shankha is a sacred emblem of the Hindu preserver god Vishnu. It is used as a trumpet in Hindu ritual,and in the past was used as a war trumpet. The shankha is praised in Hindu scriptures as a giver of fame, longevity and prosperity, the cleanser of sin and the abode of Lakshmi, who is the goddess of wealth and consort of Vishnu.The shankha is displayed in Hindu art in association with Vishnu.As a symbol of water,it is associated with female fertility and serpents (Nagas).