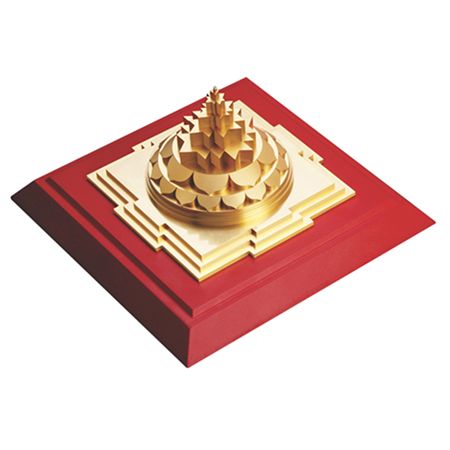 SHREE YANTRA IS THE DIVINE ABODE OF SHREE LALITA TRIPURA SUNDARI DEVI. She is one of the ten Mahavidyas.

The Sri Chakra (called the Shri Yantra) is the symbol of Hindu tantra, which is based on the Hindu philosophy of Kashmir Shaivism. The Sri Yantra is the object of devotion in Sri Vidya (Dus Mahavidhya).

Shri Chakra, as popularly mistaken to be a symbol of Lakshmi, is actually a representation of Lalitha Mahatripurasundari, an aspect of Parvati Devi. Shri does not mean Wealth in this context. In fact, Shri is just used to enhance the honour to be given to this highly revered Yantra.

Shri Yantra is strongly connected with Shri Suktam Stotram chant. It feeds the yantra. It energizes the yantra. Coupling of these 2 Vedic things yields the best outcome of all-round prosperity for the sadhak. Precise carving or etching of this yantra is essential. This yantra is made in 2D & 3D forms. Energy flow will depend on its accuracy. It is a divine article and therefore needs to be handled accordingly. It is used in personal & structural vastu.
It can be placed in home, office, shop, factory, chest or underground after energizing it. There are countless success stories of this yantra all around the globe. Benefits vary according to different users.

In the tantric belief, the first four folds/layers of the Shankha Kshetra at the Jagannath Temple at Puri have been equated with the tantric Sri Yantra formulation.

Significance of Shree Yantra:
Shree Yantra is a powerful and unfailing instrument that attracts Laxmi, the Goddess of Wealth and Prosperity. She is in fact compelled to manifest at the place where such a Mantra-energised and consecrated Yantra is placed.

You might have been to the Tirupati temple in the South and might know of the immense wealth that flows into the shrine daily. But you might not be aware that it is actually the magnetic power of an enlivened Shree Yantra established there that draws in so much wealth.

Also famous for their wealth, particularly gold, are the monasteries of Tibet.  The Buddhist Lamas too resort to a very similar means of attracting wealth. There they use a Shree Mandal which, in its money-pulling capabilities, is just as powerful as the Shree Yantra.

And if one cared to study the ancient texts and treatises one would be left amazed to find that this remarkable device has dominated the thoughts and lives of even the sages and Yogis for centuries. No other topic has gained so much attention in Tantra and Mantra scriptures as Shree Yantra and all unanimously claim that there could be no better road to riches and financial success than placing an enlivened Yantra in one's home, place of work or business centre.

Yes, just keeping the Yantra is enough! One need not even chant any Mantra or try any ritual on it. And once it finds way into your home, shop or your life, paucity or poverty just cannot linger behind. Just as the sun dispels all darkness when it rises in the morning, the Shree Yantra drives away the gloom, the despair, the agony of financial dire straits the moment it is established in one's home.

It can never be that an incense stick be lit and no fragrance emanate. Similarly a human under the benevolent effect of Shree Yantra is ever showered upon by wealth, money and comforts.

Having this Yantra is undeniably the easiest and best way of bidding adieu to one's financial problems forever. And its use can be as diverse as the means for acquiring wealth that manifest once it is obtained. A doctor with a bad practice can establish it in his chamber and pull more clients, a shopkeeper can similarly draw new customers in hordes by fixing it in his shop, a factory owner can expect a bloom in production by worshipping the Yantra, while a person in job can get an out of turn promotion and pay rise by keeping the Yantra at home or office. The possibilities are unlimited and whichever field you might be in, the Yantra proves to be a marvellous means to a better, wealthier and prosperous life.

People today feel that they do not get returns in proportion to their sincere and honest efforts. Thus much frustrated they are easily lured by corrupt means to get rich quick. If only they knew that by merely making this divine instrument of Goddess Laxmi a part of their lives they could literally wallow in wealth for rest of their lives!

From the very ancient times Shree Yantra has been used by kings, sages and businessmen alike. Shankaracharya himself established a Yantra at the four holy spiritual seats that he set up at Dwarka, Shingeri, Puri and Badrinath. What more the wealthiest of businessmen, industrialists, actors, politicians very well recognise the power of this amazing Yantra and it forms an inseparable part of their lives. Many billionaires from abroad are also known to reap the benefits of this miraculous wealth-puller.

Any person can in fact gain wealth, fame, respect, power, prosperity, vehicles and all luxuries by simply placing a Shree Yantra at home and worshipping it.

One need not worship it daily, but there sure is a special way of establishing it at home or in one's office. Early morning on any Wednesday, in a clean, sacred place spread a yellow cloth and then draw a Swastik with vermilion on it. Thereafter place the Shree Yantra on this figure. Next offer 108 beads of Kamalgattas on the Yantra each time chanting thus :

Design: Made in punchdhatu with pure gold plating.
Punchdhatu is a mixture of 5 metals of silver, gold, copper, brass and bronze. This is very important in synchronizing balance between nature and human life as nature also consists of 5 elements which includes Fire, Water, Earth, Air and Sky.

Please note we will take upto 2 weeks to despatch the order from Mumbai, India.