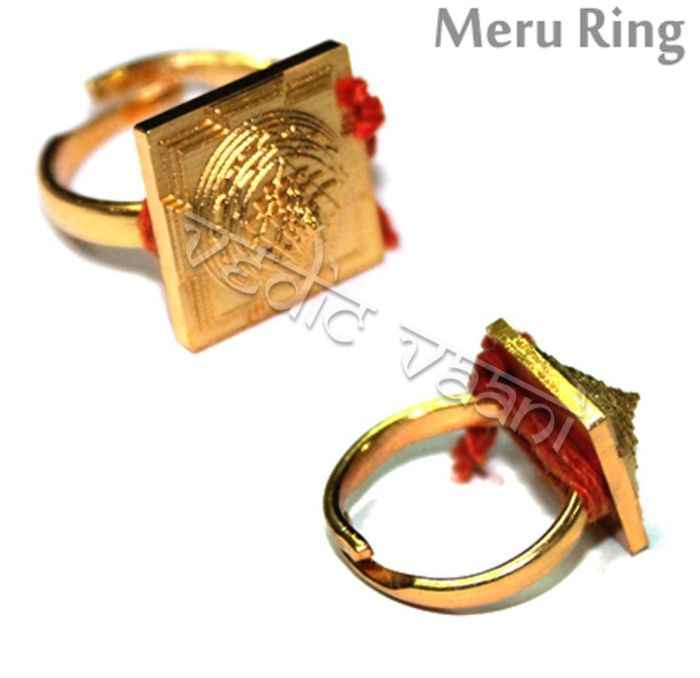 $15.91
Be the first to review this product
In stock
SKU
LY15
Quick Overview

A Beautiful and Unique Designed Adjustable Ring with Meru Shree Yantra installed on top which is made by brass and very easy to Wear.
Dimensions of the band: 0.5 inch (W) x 0.5 inch (L)  (1 x 1 cms approx)
Weight: 11 grams

A beautiful and unique adjustable ring with Meru Shree yantra installed on top of it.

SHREE YANTRA IS THE DIVINE ABODE OF SHREE LALITA TRIPURA SUNDARI DEVI. She is one of the ten Mahavidyas.

Shri Yantra is strongly connected with Shri Suktam Stotram chant. It feeds the yantra. It energizes the yantra. Coupling of these 2 Vedic things yields the best outcome of all-round prosperity for the sadhak. Precise carving or etching of this yantra is essential. This yantra is made in 2D & 3D forms. Energy flow will depend on its accuracy. It is a divine article and therefore needs to be handled accordingly. It is used in personal & structural vastu.

Shree Yantra is a powerful and unfailing instrument that attracts Laxmi, the Goddess of Wealth and Prosperity. She is in fact compelled to manifest at the place where such a Mantra-energised and consecrated Yantra is placed.

Having this Yantra is undeniably the easiest and best way of bidding adieu to one's financial problems forever. And its use can be as diverse as the means for acquiring wealth that manifest once it is obtained. A doctor with a bad practice can establish it in his chamber and pull more clients, a shopkeeper can similarly draw new customers in hordes by fixing it in his shop, a factory owner can expect a bloom in production by worshipping the Yantra, while a person in job can get an out of turn promotion and pay rise by keeping the Yantra at home or office. The possibilities are unlimited and whichever field you might be in, the Yantra proves to be a marvellous means to a better, wealthier and prosperous life.

People today feel that they do not get returns in proportion to their sincere and honest efforts. Thus much frustrated they are easily lured by corrupt means to get rich quick. If only they knew that by merely making this divine instrument of Goddess Laxmi a part of their lives they could literally wallow in wealth for rest of their lives!

From the very ancient times Shree Yantra has been used by kings, sages and businessmen alike. Shankaracharya himself established a Yantra at the four holy spiritual seats that he set up at Dwarka, Shingeri, Puri and Badrinath. What more the wealthiest of businessmen, industrialists, actors, politicians very well recognise the power of this amazing Yantra and it forms an inseparable part of their lives. Many billionaires from abroad are also known to reap the benefits of this miraculous wealth-puller.

Make: Made in brass. Adjustable ring for easy wearing.