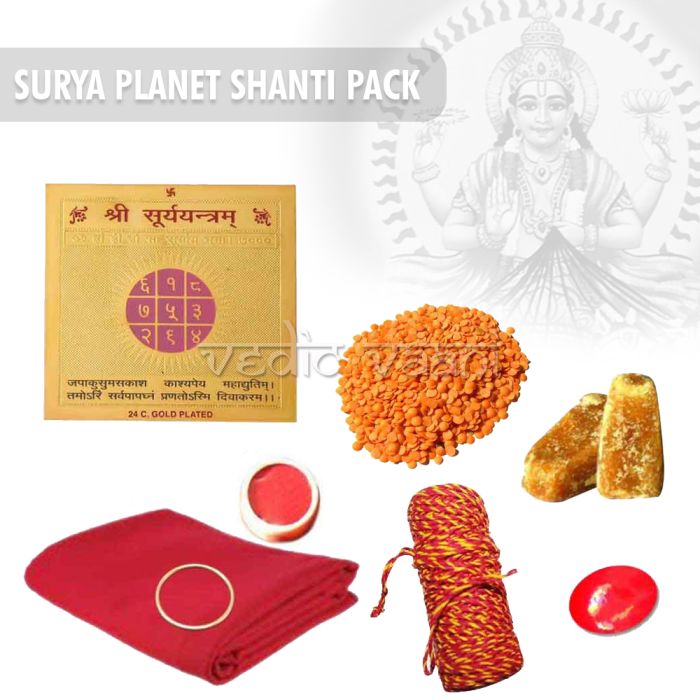 $9.55
Be the first to review this product
In stock
SKU
NP09
Quick Overview

Pack Items: Dakshina, Red cloth, Jaggery, Red Masoor (Lentil) 50 gms, Surya yantra, Red agate, Copper ring, Mauli thread.
Mantra: Om hram hrim hraum sah suryaya namah!!
Day of Donation: On Sunday in either Krishna or Vishnu temple or immerse in sea / river.
We will donate the pack on your behalf and email you the pics. You can specify your birth details on checkout.

Surya is the chief,the solar deity, one of the Adityas,son of Kasyapa and one of his wives Aditi. He has hair and arms of gold. His chariot is pulled by seven horses, which represent the seven chakras. He presides as "Ravi" over "Ravi-var" or Sunday.

In Hindu religious literature, Surya is notably mentioned as the visible form of God that one can see every day. Furthermore, Shaivites and Vaishnavas often regard Surya as an aspect of Shiva and Vishnu, respectively. The Sun is called Surya Narayana by Vaishnavas. In Shaivites, Surya is said to be one of eight forms of Shiva,named the Astamurti. He is said to be of Sattva Guna and represents the Soul, the King, highly placed persons or fathers. Invoking Gayatri Mantra or Aditya Hrudaya Mantra (Adityahridayam) are known to please the Sun God.