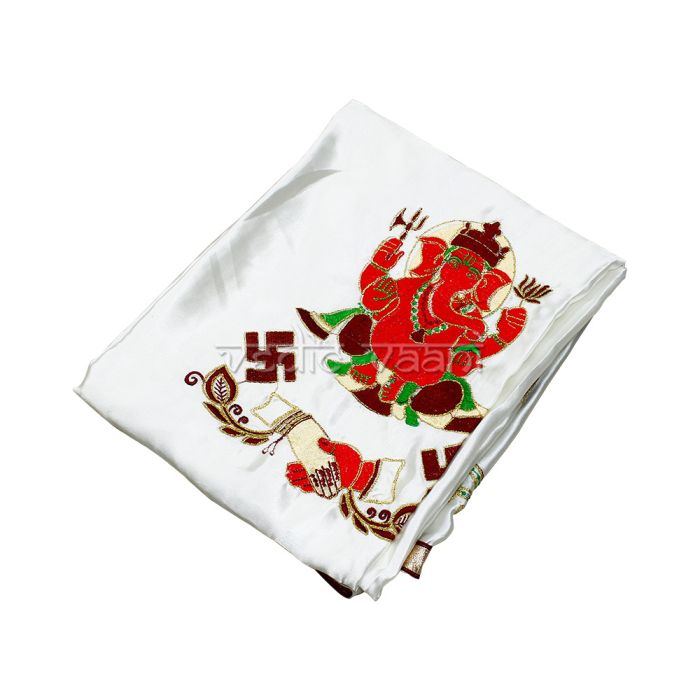 $25.00
Be the first to review this product
In stock
SKU
WD18
Quick Overview

Ganesh swastik antarpat in used in Marraige ceremony.Antarpat is the cloth that is held in front of the groom in the Hindu wedding ceremony before the bride walks into the Mandap .comes down to reveal his bride for the first time, according to the scriptures it is stated that at this point the two souls become one and at this moment their journey begins

The antarpat is an auspicious cloth which is held between the bride and groom. It is made from cotton with the emblem of the Kalash, Hasta Milap and Swastika in the center. It has the image of Lord Ganesha prominently displayed. The significance of the antarpat is that the bride and groom are not supposed to see each other until specific mantras are recited and hence this sacred cloth is held between them. Used during Hasta Milap (Gujarati ), In Maharastrain wedding between the Bride and Groom before seeing each other.

In Hindu culture, marriage is one of the most important sanskaras or rites of passage that a Hindu observes during his or her lifetime. Briefly stated, the marriage or the Vivaah Sanskar is the transition from the first stage of life, devoted to education and learning, to the second stage of life, devoted to building a household and raising children. The married couple pursues Dharma, performing the righteous duty, Artha, the acquisition of wealth and Kama, the enjoyment of natural desires. They lead a productive life of work, service and enjoyment, fulfilling various duties and obligations towards themselves, their families and society at large. In Hindu scripture, marriage is a sacrament with strong moral and ethical values. It is meant to unite the bride and the groom firmly so that they essentially become one in soul and spirit.