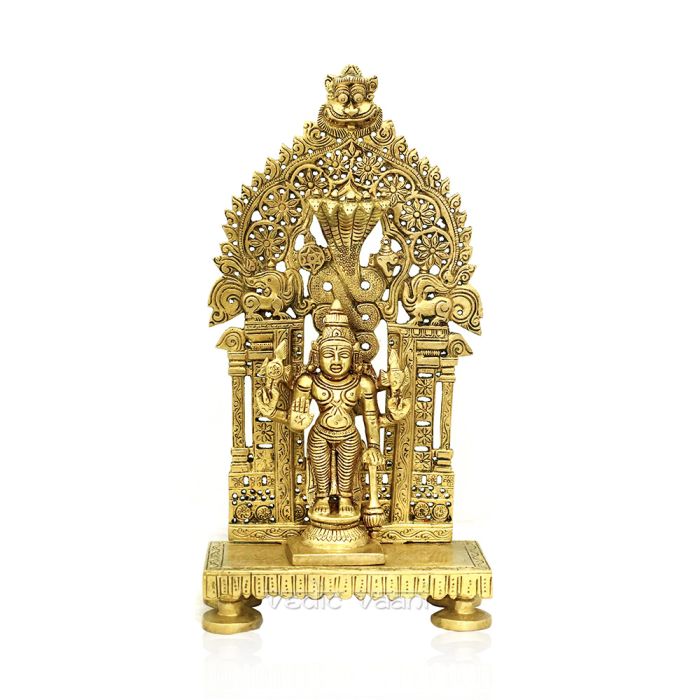 $129.55
Be the first to review this product
Out of stock
SKU
AZ1249
Quick Overview
Vishnu is the Supreme God who takes manifest forms or avatars across various ages or periods to save humanity from evil beings, demons or asuras, who became powerful after receiving boons from Brahma and Shiva.

In the Yajurveda, Taittiryia Aranyaka, Narayana sukta, Lord Narayana is mentioned as the supreme being. The first verse of Narayana sukta mentions the words "paramam padam" which literally means "highest post" and may be understood as the "supreme abode for all souls". This is also known as Paramdhama, Paramapadam, or Vaikuntha. Rigveda 1:22:20a also mentions the same "paramam padam". This special status is not given to any deity in the Vedas apart from Lord Vishnu.

As per Vishnu Sahasranama, He is as the All-Pervading essence of all beings, the master of and beyond the past, present and future, one who supports, sustains and governs the Universe and originates and develops all elements within. This illustrates the omnipresent characteristic of Vishnu. Vishnu governs the aspect of preservation and sustenance of the universe, so he is called "Preserver of the universe".

Vishnu is the only Bhagavan as declared in the Bhagavata 1:2:11. Vishnu's eternal and supreme abode beyond the material universe is called Vaikuntha, which is also known as Paramdhama, the realm of eternal bliss and happiness and the final or highest place for liberated souls who have attained Moksha.

Design: Made in heavy shining brass with last long antic finish.
Brass is well known for its grasping capacity. It grasps the divine spirit upto 30%, when compared to other metals. The spiritual vibrations are attracted towards these shining idols easily.