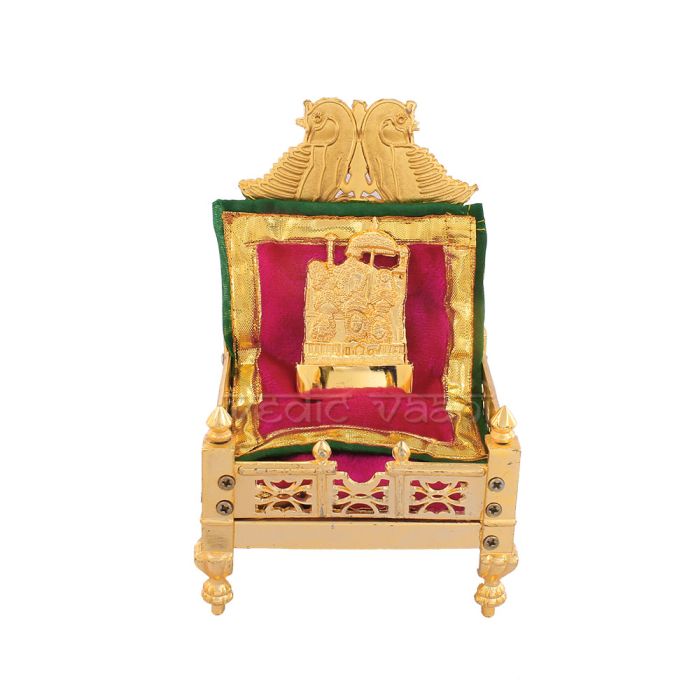 $21.82
Be the first to review this product
Out of stock
SKU
DT96
Quick Overview
Maa Vaishno Devi is believed to be the bestower of strength to the weak, sight to the blind, wealth to the poor and bless childless couples with children.

Story behind Maa Viasno Devi:
* It is believed that Mata Vaishno Devi, who was also known as Trikuta observed the ‘Navratra’, to pray for the victory of Lord Rama against Ravana. It is also said that Lord Rama also ensured her that the entire world would sing her praises and revere her as Mata Vaishno Devi. Thus, it is due to Rama’s blessings that Mata Vaishno Devi attained immortality and now attracts thousands of pilgrims to the shrine each year.

* Bhairo Nath, who chased Mata Vaishno Devi and pestered her to marry him, was actually sent by Gorakh Nath, who was a Mahayogi. Gorakh Nath had a vision of the conversation between Lord Rama and Vaishnavi. Led by curiosity to know more about Vaishnavi, the Mahayogi sent his prime disciple to collect information about the Goddess.

* The Goddess after forgiving Bhairo Nath and allowing him to attain Moksha shed her human form and took the form of a rock in order to continue uninterrupted meditation. Mata Vaishno Devi, hence, gives her devotees darshan in the form of a five and half feet tall rock, with three pindies or heads on the top. The cave where she transformed herself is now the holy shrine of Vaishno Devi and the pindies form the sanctum sanctorum.

* Navaratri is considered the most auspicious time to visit Mata Vaishno Devi cave temples. Visiting Vaishno Devi during the Navaratras is believed as being one step closer to attaining heaven.