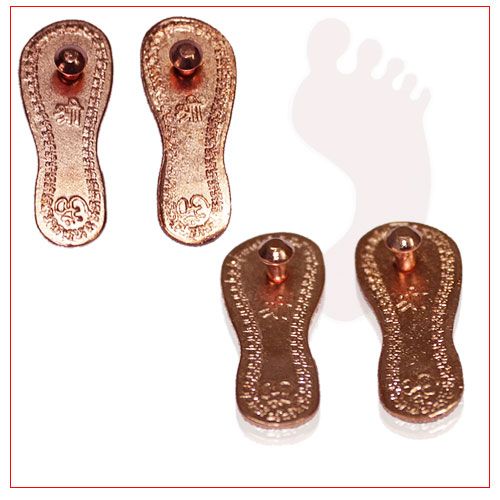 $3.73
Be the first to review this product
In stock
SKU
PI07
Quick Overview

Buy deity paduka, charan padukas online from India. Paduka also means foot prints of Hindu gods such as Vishnu, Shiva and several saints and masters that are worshipped in this symbolic form in houses and also in temples built for this purpose.

Paduka is a compound word made up of two words namely, "pada" and "ka". In Sanskrit language, 'Pada' means: "foot" and kaa is a diminutive ending with literal meaning of "small".

In Rigveda, it is quoted as representing the universe namely the Prithvi (earth), Vayu (air), Akash (sky) and the element of the realm beyond the sky. In the epic Ramayana, King Dasaratha who had a curse on him, sent his son Rama (an incarnation of god Vishnu) for 14 years of exile, at the behest of his wife Kaikeyi (step mother of Rama) as she wanted her son Bharata to be crowned as the king. Rama, his consort Sita and brother Laksmana went into a forest to spend their period of exile. But Bharata did not want to have the kingdom. He, therefore, met Rama who was living in the forest and beseeched him to return to Ayodhya. When Rama told Bharata that he will return only after completing his fourteen years in the forest, Bharata requested for Rama's paduka to serve as his proxy, to be crowned in Ayodhya Raj Singhasan (King's throne) of Kosala country and to serve as an object of veneration for Rama's followers. Bharata carried Rama's golden sandals (padukas) with great reverence by placing them on his head as a mark of his obedience to his elder brother. Bharata ruled Kosala as Rama's proxy in the name of "Ram's Padukas"

Paduka also means foot prints of Hindu gods such as Vishnu, Shiva and several saints and masters that are worshipped in this symbolic form in houses and also in temples built for this purpose. One such temple is the Gaya temple dedicated to Vishnupada or Vishnu's feet. Similarly, Buddha's foot prints are worshipped under the Bodhi tree in Bodh Gaya.

Copper is well known for its grasping capacity. It grasps the divine spirit (sattvikta) upto 30%, when compared to other metals. So, copper is considered to be holy & auspicious all the time. Copper can destroy bad spirits like Raj & Tam (i.e. darkness & bad behavior). If water is kept in a copper vessel, it becomes 70% pure because spirit of calmness is absorbed in it. The spiritual vibrations are attracted towards copper items easily.  Just as copper has the ability to absorb the sattvik frequencies of deities, it has also capacity of transmitting them. Thus it becomes rich in divinity in a short period. The sattvik frequencies of deities are then transferred to other components of puja. Once the copper items are