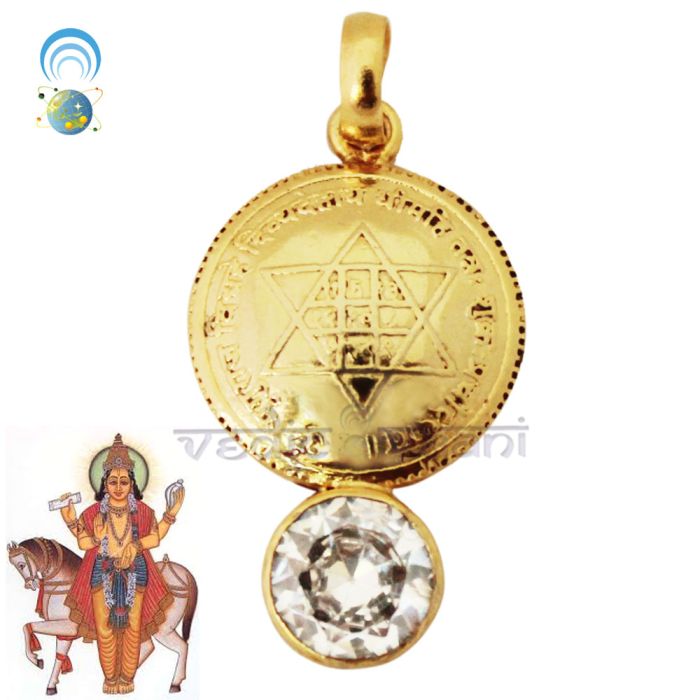 $33.00
Be the first to review this product
Out of stock
SKU
YL28
Quick Overview

Shukra yantra and Crystal locket in copper to get blessings of Venus planet for beauty, refinement, success in land and property. It also pacifies the malefics of Venus planet in a person's birth chart.

Crystal is a gem of manifestation that energizes and activates the energy centers within the body. It helps the wearer to think clearly, allowing them to focus and become clear about their dreams and desires. Assisting with spiritual development. It assists in removing blockages in the body so energy can flow smoothly.

Shukra, the Sanskrit for "clear, pure" or "brightness, clearness", is the name the son of Bhrigu and Ushana, and preceptor of the Daityas, and the guru of the Asuras, identified with the planet Venus (with honorific, Shukracharya). He presides over 'Shukra-var' or Friday. He is of white complexion, middle-aged and of agreeable countenance. He is described variously mounted, on a camel or a horse or a crocodile. He holds a stick, beads and a lotus.
He is Rajas in nature and represents wealth, pleasure and reproduction. In Vedic astrology, there is a dasha or planetary period known as Shukra Dasha which remains active in a person's horoscope for 20 years. This dasha is believed to give more wealth, fortune and luxury to one's living if a person has Shukra positioned well in his horoscope as well as Shukra being an important benefic planet in his/her horoscope.

The locket has yantra image on one side and also added Crystal. The yantra would be blessed and energized.