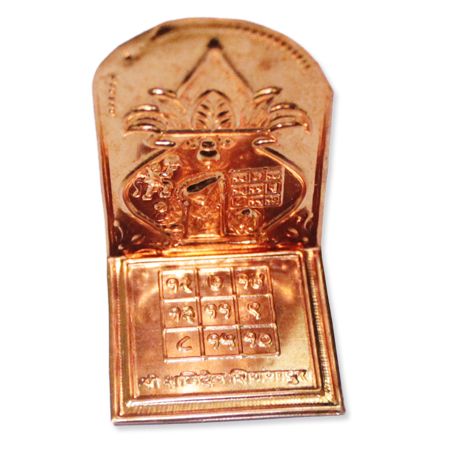 $5.45
Be the first to review this product
In stock
SKU
SY11
Quick Overview

Shani yantra in standing L shape. It has Kalash symbol at the top and Shani yantra at the bottom.

Shani yantra is to get blessings from Saturn planet for success in all tasks, money, name and fame.It also pacifies the malefics of Saturn planet in a person's birth chart.

Shani yantra blesses with career growth, business expansion,and relieves from depression,despair and mental confusion.It is also helpful for students to score well in examinations.Also recommended for couples who wish for a trouble free and happy life span.
Shani is one of the nine primary celestial beings in Vedic astrology.Shani is embodied in the planet Saturn.  Shani is the Lord of Saturday.The origin of word Shani comes from the following:Shanaye Kramati Sa i.e. the one who moves slowly. Saturn takes about 30 years to revolve around the Sun, thus it moves slowly compared to other planets, thus the Sanskrit name.Shani is actually a demi-god and is a son of Surya (the Hindu Sun God) and Surya's wife Chhaya.It is said that when he opened his eyes as a baby for the very first time, the Sun went into an eclipse,which clearly denotes the impact of Shani on astrological charts (horoscope).He is depicted dark in colour,clothed in black;holding two daggers.His Tattva or element is air, and his direction is west.He is Tamas in nature and represents learning the hard way, career and longevity.

Design: Made in high quality copper.
Copper is well known for its grasping capacity. It grasps the divine spirit (sattvikta) upto 30%, when compared to other metals. So, copper is considered to be holy & auspicious all the time. Copper can destroy bad spirits like Raj & Tam (i.e. darkness & bad behavior). The spiritual vibrations are attracted towards copper items easily.  Just as copper has the ability to absorb the sattvik frequencies of deities, it has also capacity of transmitting them. Thus it becomes rich in divinity in a short period.

What is a Yantra?
Yantra is a mystical instrument, which acts as a great cosmic conductor of energy, having symbolic diagrammatic representation of a Deity. It is used for harmony, prosperity, success, good health, wealth, yoga and meditation. Yantras are also referred as the abodes of the divine powers of God. Read more.

How to use Shani Yantra?
1. Place the Yantra facing the west direction of your house or in puja altar.
2. Offer daily incense to the yantra.
3. Offer sandal paste in the center of the Yantra.
4. Offer Prasada (sweet offerings) to the yantra.
5. Chant the Mantra of the Yantra, minimum 11 times.
6. Consume the Prasada.