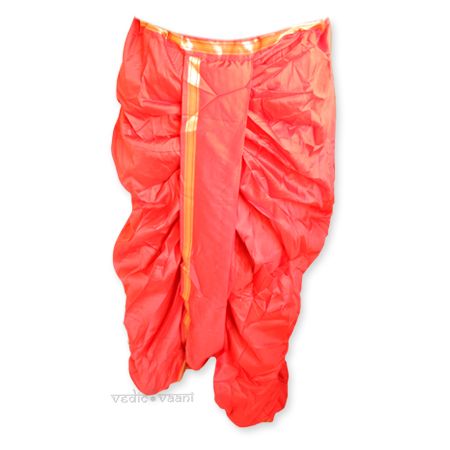 $23.91
Be the first to review this product
In stock
SKU
DH30
Quick Overview

A ready to wear dhoti, which comes folded in the required way to directly slip in and go for the occasion or ceremony.

For centuries,many communities across India and many other parts of the world specially originating from the Great Sanatan Dharm have been wearing 'Dhoti'.There are different ways of wearing a dhoti depicting different cast,creed or communities in India, like a pandit has one way of wearing a dhoti,a farmer wears it in a different manner and a south Indian community wears it differently altogether and so on.

Deriving one possible spiritual explanation out of the same is that this type of cloth,i.e. dhoti, could be THAT simplest forms of cloth which is made to cover the body in the most simplest forms and which is its real purpose or to say which fulfills the Need for what it is made mainly FOR.Where as to proceed further there on, one crosses the fine line in between the Need and Greed where the skillful designing, stitching and decoration like embroideries could take you away from the path of eternal bliss,which eventually has no end.