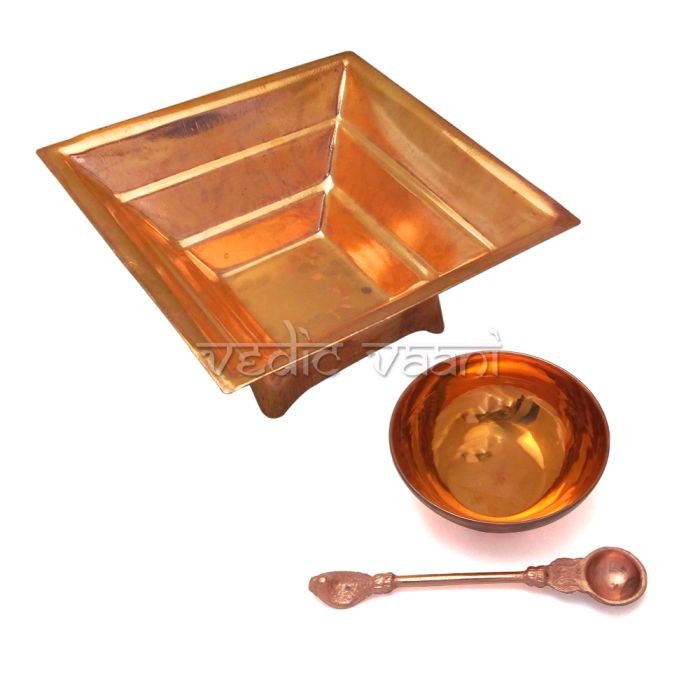 $34.09
Be the first to review this product
In stock
SKU
HW34
Quick Overview

Havan Kund made in pure copper pyramid shape yagya mini set for daily worshipped, Agnihotra Homam, vastu Homam, Moring & sandhya Dhoop Arti. Mini set best uses for cowdung cake ahutee, hawansamagri, samith sacred offering in the yagna, offered in the fire during yagnas and homas, after completion of every mantra chant. It is the sacred food for the deities.Havan Samagri (a mixture of various dried herbal , roots and leaves) is offered in the ablazed fire which disseminates in micro form, in the air, to purify the environment besides activating the air as disinfectant germicidal agent.It is anti-bacterial and is made from high grade raw materialsThe Havan Samagri is the food for the deities.

In a typical Homa, a priest invokes the presence of the Deity in the fire through specialized mantras. Since mantras are revealed by Enlightened sages, all mantras carry immense power within them. Once energized, till the end of the homa, the fire itself becomes a deity. Then several oblations (ahutis) are offered into the fire using Havan Samagri, at the end of every mantra. The smoke that emanates from the fire receptacle – homa kunda – energizes the whole space where the homa is done and creates a positive effect in that place.

Yagna spoon for performing the yagna. This spoon can be used to offer oblations to the fire or to take out ash (vibhuti) from the yagna.

Bowl is an integral part of poojas where in the holy charan amrit is placed before the pooja and then distributed upon the Pooja's completion. The Charanamrit literally means Amrit (Holy Nectar) from the Charan (Feet of the Lord) of the worshipped deity and is partaken as a sacred offering or a holy gift after the completion of the pooja. In many Hindu homes the cooked food is first offered to the Lord each day and is then consumed by everyone else. The offered food is mixed with the rest of the food and then served as prasad.

Pali is used as a vital part of the poojas. There is a conception of Charanamrita rituals. Panchpatra & Pali are the Pooja items that contain this Charanamrita. These containers are placed before the gods or the goddesses just before all the other rituals for the poojas begin to take place. They are gifts to the deity and that is why Panchpatra & Pali are hugely important for the successful Poojas. They are regarded as holy things and everyone is not allowed to touch these items except for the Purahit or the worshiper himself. Actually the word Charanamrita means the holy nectar and there are lots of folk tales related to this item. After the pooja is completed, Charnamrit is given to the people as gifts from gods and goddesses. The devotees drink it.