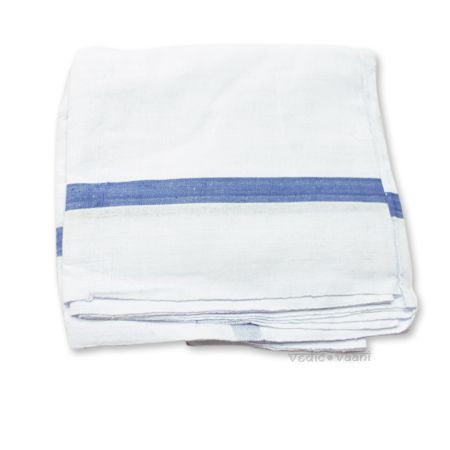 $4.45
Be the first to review this product
In stock
SKU
AC05
Quick Overview

For centuries,many communities across India and many other parts of the world specially originating from the Great Sanatan Dharm have been wearing 'Dhoti'.There are different ways of wearing a dhoti depicting different cast,creed or communities in India, like a pandit has one way of wearing a dhoti,a farmer wears it in a different manner and a south Indian community wears it differently altogether and so on.

Dhoti bears a great importance in the Sanatan Dharm for one main reason to which the current Guru of the famous Dera Baba Rudrashram in Himachal Pradesh, Shri Shri 1008 Baba Sugriva Nand Ji Maharaj,the gyata/ knower of all Vedas and Shastras said that,"It is mentioned in the Shastras that one should always wear a pavitra/ fresh(clean and washed)cloth while doing Pooja everyday. And 'Dhoti'is the purest forms of cloth.It can be and is made to be washed everyday and easily dried up to wear every next day.For the word itself means similar to washed it Dhoti or'Dho' + 'Ti'a cloth that one can 'Dho'(a hindi/sanskrit word meaning wash) everyday and wear a-fresh every next day."

Deriving one possible spiritual explanation out of the same is that this type of cloth,i.e. dhoti,could be THAT simplest forms of cloth which is made to cover the body in the most simplest forms and which is its real purpose or to say which fulfills the Need for what it is made mainly FOR.Where as to proceed further there on,one crosses the fine line in between the Need and Greed where the skillful designing,stitching and decoration like embroideries could take you away from the path of eternal bliss,which eventually has no end.