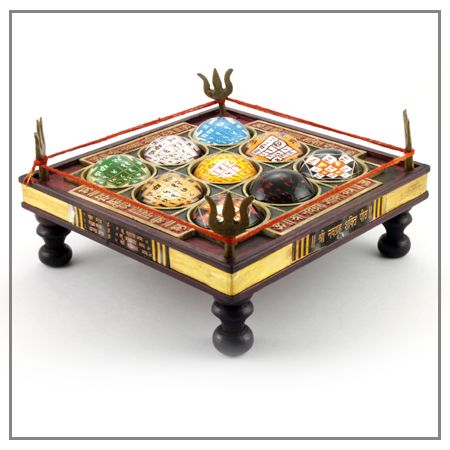 $46.00
Be the first to review this product
Out of stock
SKU
DY13
Quick Overview

Navgraha yantra chowki with the nine planet (NavGraha) yantras placed on it and surrounded by four tridents.

The cosmic energy we receive contains different energies coming from different grahas. Each Graha carries a specific energy quality, which influences individual in a specific manner. These energy connections remain with the natives of Earth as long as they remain on earth. Thus nine planets are transmitters of universal, conventional energy.

Traditionally it is believed that if one keeps “Nav Graha Chowki” in the house, office or working place after energizing it with prescribed vedic mantras, it removes obstacles and fulfills all desires of the native.

Installation procedure: First of all sprinkle Gangajal on this chowki,then bathe it with raw milk, then with curd, after that bathe it with pure Ghee followed by powdered sugar. Finally, bathe it with pure water and dry it with red cloth, apply vermillion, rice and offer flower. Light incense stick and recite following mantras.

After this,install this in the eastern direction in your office or home and say Aarti to Lord Vishnu.