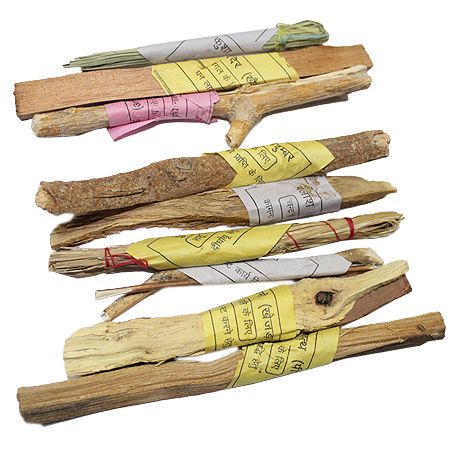 $1.00
Be the first to review this product
In stock
SKU
PI83
Quick Overview

The Navgrahas are worshipped in every homa and yagna. These wooden sticks are offered to the homa fire. There are 9 sticks each representing one of the Navagrahas.Havan is a sacred fire ritual done in the Vedic Hindu tradition
Quantity: 1 sticks of each planet (total 9 sticks)

The nine planets in our horoscope control our karma, our desires and their outcomes. Each of these nine planets exerts an influence in our lives, which is called "dasa". The Navgrahas are worshipped in every homa and yagna. These wooden sticks are offered to the homa fire. There are 9 sticks each representing one of the Navagrahas.
Set of 9 sticks for Navgrahas:
- Ark for Sun
- Palash for Moon
- Khadir for Mars
- Peepal for Jupiter
- Apamarga for Mercury
- Audambar for Venus
- Sami for Saturn
- Durva for Rahu
- Kusha for Ketu

Purpose: Used in fire ceremony (Havan) to pacify all planets.

In a typical Homa, a priest invokes the presence of the Deity in the fire through specialized mantras. Since mantras are revealed by Enlightened sages, all mantras carry immense power within them. Once energized, till the end of the homa, the fire itself becomes a deity. Then several oblations (ahutis) are offered into the fire using Havan  sticks, Samagri at the end of every mantra. The smoke that emanates from the fire receptacle homa kundaenergizes the whole spacewhere the homa is done and creates a positive effect in that place.