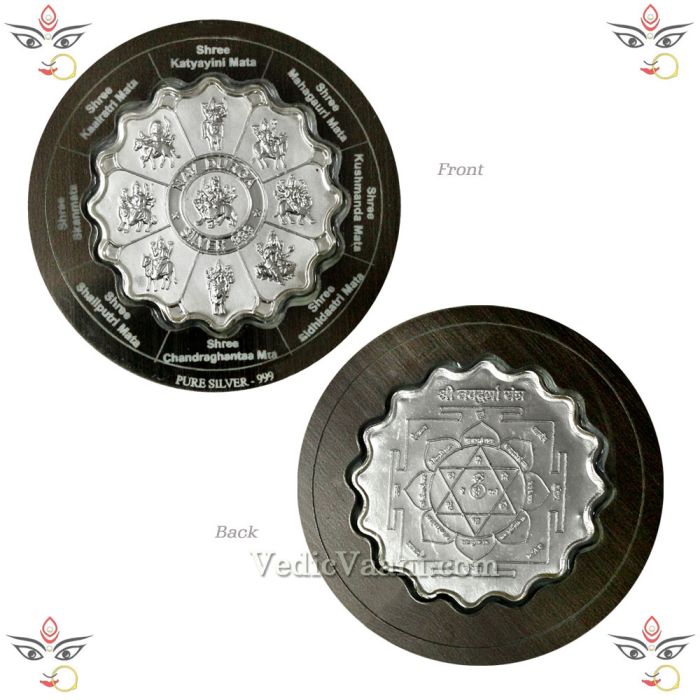 $37.55
Be the first to review this product
Out of stock
SKU
SY16
Quick Overview

Navdurga Yantra has been Beautifully Designed in Silver Plate in which the Yantra Image is on one side and Deity Image on the other side.
Dimensions: 5 mm (thickness) x 3.5 inches (diameter)
Weight of silver: 10 gms
Total Weight: 35 gms

Its uniqe Navdurga Yantra in Pure Silver has yantra image on one side and deity image of the other side. The yantra would be blessed and energized.

The 9 forms of supreme Goddess Durga are:
1. Shailaputri: She is known as 1st phase of Durga when she took birth as the daughter of Great Himalayas.
2. Brahmacharini: She is Devi's that phase when Maa Parvati before marriage was Devi Yogni and Devi Tapsvini.
3. Chandraghanta: May that Durga Devi, who rides on Tiger, who is endowed with intense anger and violence and is renowned by the name of Maa Chandraghanta, bestow her grace on me. Chandraghanta Maa is known and named Chandraghanta or Chandra-Khanda as Maa Durga wears the semi-circular moon (Chandra) which appears like a bell (Ghanta) on her forehead.
4. Kushmanda: In this form Mother Durga creates solar system by liberating her power to Lord Sun.
5. Skandamata: As Mother of Skanda or Kartikeya, Maa Parvati or Maa Durga is known as Skandmata.
6. Kathyayini: When Maa Parvati's Partial expansion took birth in Sage Katya's home and gets energy from trinity and demi Gods, then the Goddess was known as Maa Katyani.
7. Kaalratri: In Skand Purana, Maa Parvati liberates Devi's golden outer sheath and becomes dark complexioned then Goddess becomes Goddess Kaalratri.
8. Mahagauri: Devi is 16 years old unmarried Goddess Parvati.
9. Siddhidaatri: She is one who was worshiped by Lord Shiva to become in the form of Goddess Ardhnarishwara, then Goddess Shakti Appeared from the left side of Lord Shiva.

Silver is a sattvic metal. Silver has the ability to imbibe the Raja-predominant waves of desire. It imbibes 35% of divine consciousness. It is believed that silver stimulates energy flow to itself, so when silver jewellery is on body it helps to accumulate more energy.