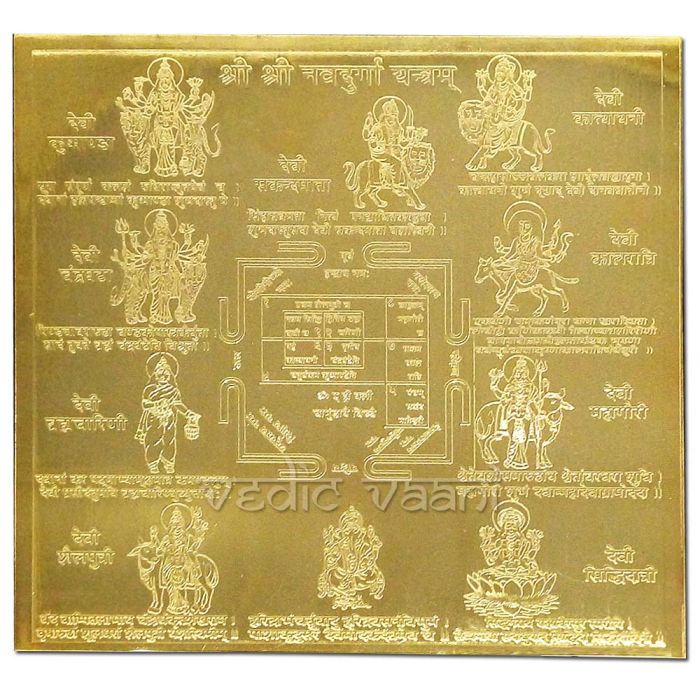 $34.09
Be the first to review this product
In stock
SKU
MY56
Quick Overview

The 9 forms of supreme Goddess Durga are:
1. Shailaputri: She is known as 1st phase of Durga when she took birth as the daughter of Great Himalayas.
2. Brahmacharini: She is Devi's that phase when Maa Parvati before marriage was Devi Yogni and Devi Tapsvini.
3. Chandraghanta: May that Durga Devi, who rides on Tiger, who is endowed with intense anger and violence and is renowned by the name of Maa Chandraghanta, bestow her grace on me. Chandraghanta Maa is known and named Chandraghanta or Chandra-Khanda as Maa Durga wears the semi-circular moon (Chandra) which appears like a bell (Ghanta) on her forehead.
4. Kushmanda: In this form Mother Durga creates solar system by liberating her power to Lord Sun.
5. Skandamata: As Mother of Skanda or Kartikeya, Maa Parvati or Maa Durga is known as Skandmata.
6. Kathyayini: When Maa Parvati's Partial expansion took birth in Sage Katya's home and gets energy from trinity and demi Gods, then the Goddess was known as Maa Katyani.
7. Kaalratri: In Skand Purana, Maa Parvati liberates Devi's golden outer sheath and becomes dark complexioned then Goddess becomes Goddess Kaalratri.
8. Mahagauri: Devi is 16 years old unmarried Goddess Parvati.
9. Siddhidaatri: She is one who was worshiped by Lord Shiva to become in the form of Goddess Ardhnarishwara, then Goddess Shakti Appeared from the left side of Lord Shiva.
The yantra contains the Beej mantra of the Supreme Goddess.

Yantra Details: Made in high quality copper with pure gold plating. Thick copper plate is used for durability.
Copper is well known for its grasping capacity. It grasps the divine spirit (sattvikta) upto 30%, when compared to other metals. So, copper is considered to be holy & auspicious all the time. Copper can destroy bad spirits like Raj & Tam (i.e. darkness & bad behavior). The spiritual vibrations are attracted towards copper items easily.  Just as copper has the ability to absorb the sattvik frequencies of deities, it has also capacity of transmitting them. Thus it becomes rich in divinity in a short period.

The most sattvik metal is Gold. It imbibes 70% of divine consciousness. As per spiritual science, the gold augments the absolute fire principle that enables the chakras above the waist to absorb positive energies. Gold refers to wisdom, glory and holiness. The indestructibility and immutability of gold in contrast to the impermanence of human life serve to make it particularly appropriate as a symbol of immortality.

How to use Navdurga Yantra?
1. Place the Yantra facing the North direction of your house or in puja altar.
2. Offer daily incense to the yantra.
3. Offer sandal paste in the center of the Yantra.
4. Offer Prasada (sweet offerings) to the yantra.
5. Chant the Mantra of the Yantra, minimum 11 times.
6. Consume the Prasada