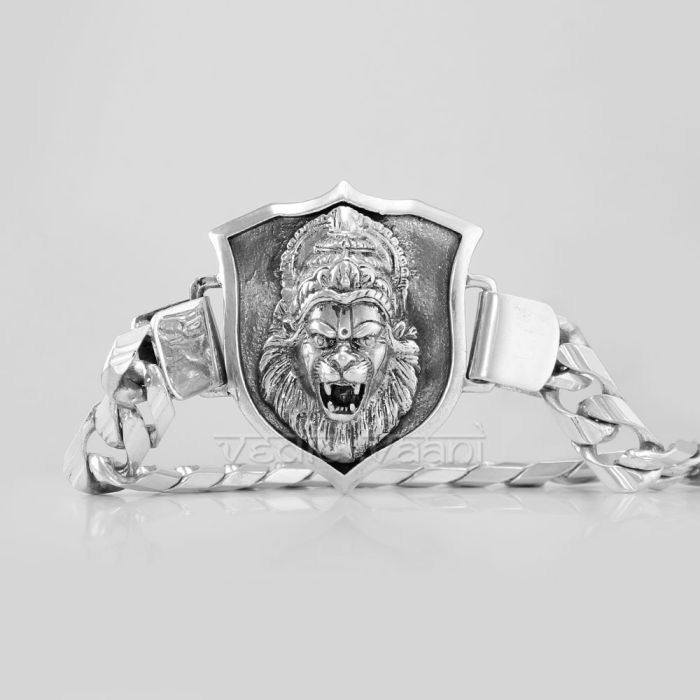 $177.27
Be the first to review this product
In stock
SKU
BBS50
Quick Overview
Narasimha Narasingh, Narsingh and Narasingha in derviative languages is an avatar of the Hindu god Vishnu and one of Hinduism's most popular deities, as evidenced in early epics, iconography, and temple and festival worship for over a millennium.

Narasimha is often visualised as half-man/half-lion, having a human-like torso and lower body, with a lion-like face and claws.This image is widely worshipped in deity form by a significant number of Vaishnava groups. He is known primarily as the 'Great Protector' who specifically defends and protects his devotees in times of need.

Make: Made in pure silver.
Silver is a sattvic metal. Silver has the ability to imbibe the Raja-predominant waves of desire.It imbibes 35% of divine consciousness.It is believed that silver stimulates energy flow to itself.
Dimensions of Narsimha face: 1.5 inches (H) x 1.5 inches (W)
Length of Bracelet: 8.5 inches
Silver Weight: 60 grams
More Information
Reviews
0
Rating:
0% of 100
Reviews
Write Your Own Review
Suggestion
Sign in with Facebook
Sign in with Google
Sign in with Twitter