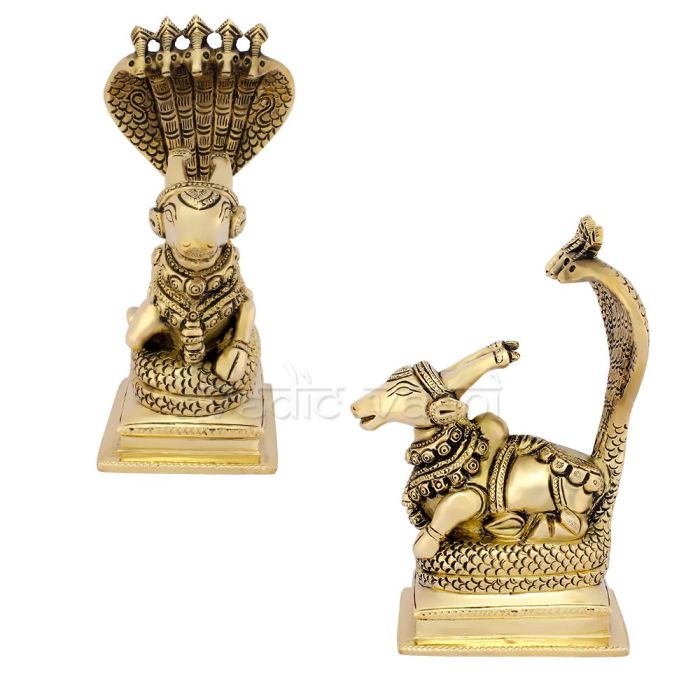 Idol of Nandi on Sheshnag

$71.82
Be the first to review this product
In stock
SKU
AZ958
Quick Overview
Lord Shankar (Shiv ji) always travels on Nandi, hence Nandi is Called the Vahan of Lord Shiva. Nandi is considered to be one of Shiva's chief attendants and occasionally is depicted in sculpture as a bull-faced dwarf figure. The Nandi Statue is hugely popular among Lord Shiva devotees.
Design: Made of thick brass with long lasting finish.
Dimensions of Idol: 6 inches (H) x 4 inches (L) x 2.5 inches (W)
Total weight: 1.3 kgs

During the churning of the ocean when poison (halahala) came out everybody ran away except Lord Siva, followed by Nandi, came forward to help as He was the only one who could counteract this deadly poison. Shiva took the poison into his hand and drank it,the descent of the poison was in turn stopped at His throat, by His divine consort. Shiva is therefore also known as Nilaka?? ha (the blue-throated one). Nandi saw some of the poison spill out of Siva's mouth and immediately drank it off the ground. The devas and asuras watching were shocked and wondered aloud what would happen to Nandi. Lord Siva calmed their fears saying, "Nandi has surrendered into me so completely that he has all my powers and my protection".