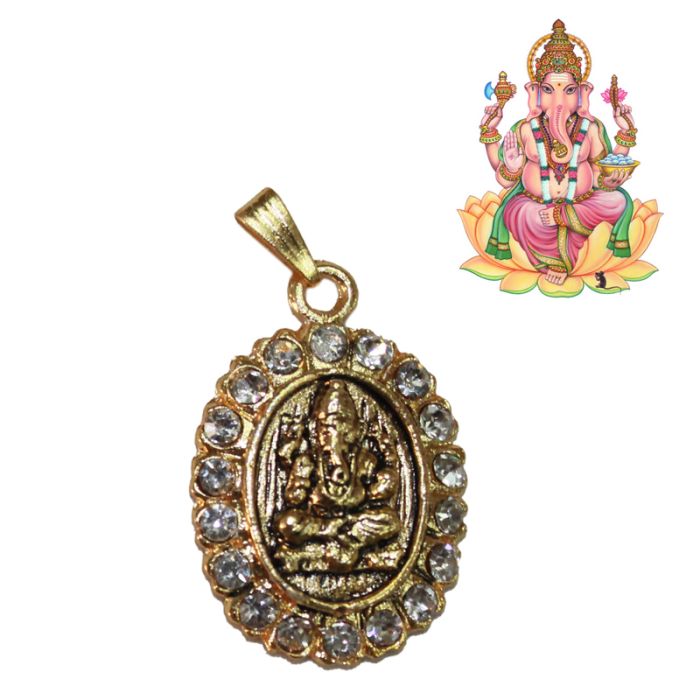 $2.73
Be the first to review this product
Out of stock
SKU
LY23
Quick Overview

Lord Ganesha Pendant Locket Made in Metal with Gold Polish and Oxidised Finish and Studded with white stones which makes it elegant to wear.
Size: 1 inch (Height) * 0.75 Inch (Width)

Lord Ganesha Pendant Locket Made in Metal with Gold Polish and Oxidised Finish and Studded with white stones which makes it elegant to wear.

Lord Ganesha is the "the lord of beginnings" and most widely worshipped Hindu God.  This elephant-headed God appears very widely throughout all Hindu traditions. He is worshipped at the start of any action or venture, for he is considered to be the Lord who removes obstacles (vignam) and hence is also called Vigneshwara.

Ganapati, also known as Ganesha, is Shivas first son. Lord Ganapati, who has an elephant head, occupies a very special place in the hearts of Hindus because they consider him the Remover of Obstacles. Most Hindu households have a picture or statue of this godhead, and its not uncommon to see small replicas of Ganapati hanging from rearview mirrors of cars and trucks.Ganesha is one of the most easily recognizable Gods from any religion, because he has the head of an elephant.

Ganesha means "Lord of hosts."The most significant symbols that we see other than the elephant head are the trident on his forehead and the letter OM on his palm. Sometimes the OM is on his forehead. You also see a mouse at his feet. Sometimes he is holding sweets, little candies, or rice bowls in his hands.

Ganesha is the child of Shiva and Shakti (Parvati, Uma).Ganesha is also represented as the source of all wisdom and knowledge.Lord Ganesh is known by various names such as Ganapati, Vinayaka or Vighneswara. Lord Ganesha is the God who helps us overcome obstacles in life.

"Vakratunda Mahaakaaya Suryakotee Sama PrabhaNirvighnam kuru mey Deva Sarva kaaryeshu Sarvadaa"
This Mantra helps in praising the Lord by saying "O Lord Ganesha who has a large body, curved marvelous trunk and a brightness that supersedes even a million suns, please hear my plea and remove all the obstacles in my work."

Ganesh is one of the best known and loved deities in the Hindu pantheon of gods, and indeed is the most recognized of the Hindu gods outside of India. Ganesh (also spelled Ganesa or Ganesha and known as Ganapati, Vinayaka and Pillaiyar) is the Lord of Good Fortune who provides prosperity, fortune and success.  He is the Lord of Beginnings and the Remover of Obstacles of both material and spiritual kinds.

Because of these attributes, Ganesh is widely revered by almost all castes and in all parts of India, regardless of any other spiritual affiliations.  His image is found everywhere, in many different forms, and he is invoked before the undertaking of any task.  Ganesh is also associated with the first Chakra, or energy wheel, which underpins all of the other Chakras and represents conservation, survival and material well-being.  He is considered to be a patron of the arts and sciences and of letters.  Devotees believe that if Ganesha is worshiped, he grants success, prosperity and protection against adversity.  In a lesser known role, Ganesh is also the destroyer of vanity, selfishness and pride.