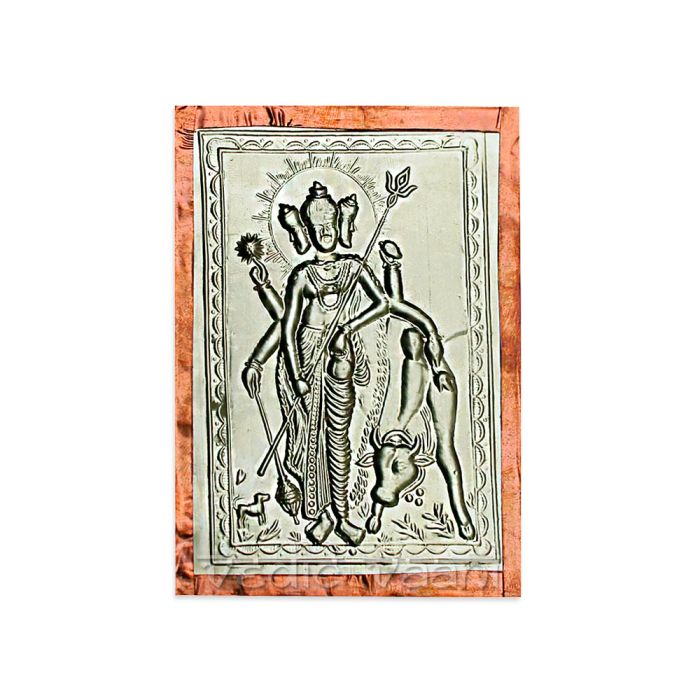 $8.18
Be the first to review this product
In stock
SKU
PF83
Quick Overview

Lord Dattatreya encompasses the trinity of Brahma, Vishnu and Shiva, collectively known as Trimurti. The name Dattatreya can be divided into two words - "Datta" (meaning given) and "Atreya" referring to the sage Atri, his physical father.

The typical form in which the Lord Dattatreya appears is that of an ascetic with 3 heads & 6 arms (symbolizing the unification of the three Gods). His whole body is covered with Vibhuti (holy ash). He has an aura of a rising Sun around him and has lustrous Jatta (long hair) tied in a knot over his head. He is dressed in a deer skin and is a radiant and assuring figure for the devotees. His arms are seen to be holding various objects each of which has a spiritual connotation. Thus, he is seen with a Mala (rosary), Kamandalu (holy pot), Damaru (holy musical instrument), Trishul (trident), Shankh (conch) and Chakra (a holy weapon).

The Lord Brahma then created infinite sons, amongst whom, were the seven great Rishis (Sages). The senior most amongst them was the Atri Rishi. His wife Mahasati Anasuya was the daughter of the highly devoted and pious couple, Kardam Rishi and Devahuti. Atri Rishi & his wife Anasuya desired for a son, who would be an incarnation of Nirguna Parabrahma [the Infinite Supreme]. Atri Rishi performed tapasya [penance] standing on one leg for 100 years on the Ruksha mountain abjuring food and water. Pleased with his tapasya [penance], the Gods Brahma, Vishnu and Mahesh appeared before him to grant him a boon.
On hearing Atri Rishi's desire, the Gods explained that since the Nirguna Parabrahma cannot be seen, they, as manifestation of the Nirguna [infinite / attributeless] have appeared. They blessed him saying that his wish would be fulfilled.

Invoke the blessings of Lord Dattatreya by installing this pratima in your puja altar, prayer room, office cabin or living area.