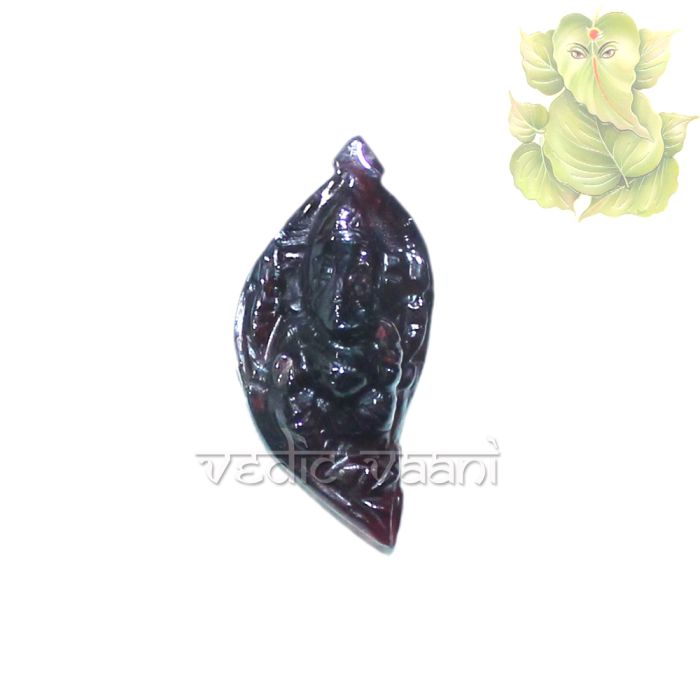 $42.73
Be the first to review this product
Out of stock
SKU
GS169
Quick Overview

Lord Ganesh in leaf shape made of natural garnet gemstone. Ganesha is one who clears your way of all obstacles. His other name is Vighnaharta, i.e. the one who takes away all impediments, obstacles, sorrows.
Dimensions: 30 mm (H) x 14 mm (W) x 9 mm (D)
Weight: 24.7 carats

Lord Ganesh in leaf shape made of natural garnet gemstone.

Ganesha is one who clears your way of all obstacles. His other name is Vighnaharta, i.e. the one who takes away all impediments, obstacles, sorrows. So, he is worshipped to ensure the success of any new venture.lepidolite Stone positively influences those that are suffering from depressions, because of its colour and the golden specks it reminds us of Sunstone, and it also influences the psyche in a similar way. This stone will provide you with energy, inner strength and a positive outlook. On the physical level this stone will protect you against ulcers and bacterial infections.

Lord Ganesha is widely revered as the remover of obstacles and more generally as the Lord of beginnings and the Lord of obstacles, patron of arts and sciences, and the deva of intellect and wisdom. He is honoured at the beginning of rituals and ceremonies.

Garnets have been widely known for thousands of years, and it has long been known as the warriors stone, as soldiers from the world over wore or carried this gem as a talisman against death and injury.  But it was also said to bring victory, peace and tranquillity, as well as healing injuries by stopping the flow of blood.

When given as a gift, the garnet is said to grant loyalty and affection. If wearing a garnet though, beware if the stone loses its luster, this is a sign of approaching danger or disaster.

It is an excellent stone for manifestation, and can assist mystically with building one's self-confidence as well as success in one's chosen profession.  The Garnet is commonly known as the stone for a successful business. If your business is not as good as it should be, just put three or more garnets on your desk, and improvement should be forthcoming.

Garnet is also a protective energy stone which is especially effective for protection from evil. It is also often used for gentle spiritual healing. Lore tells that garnet can heal the blood, heart and lungs.