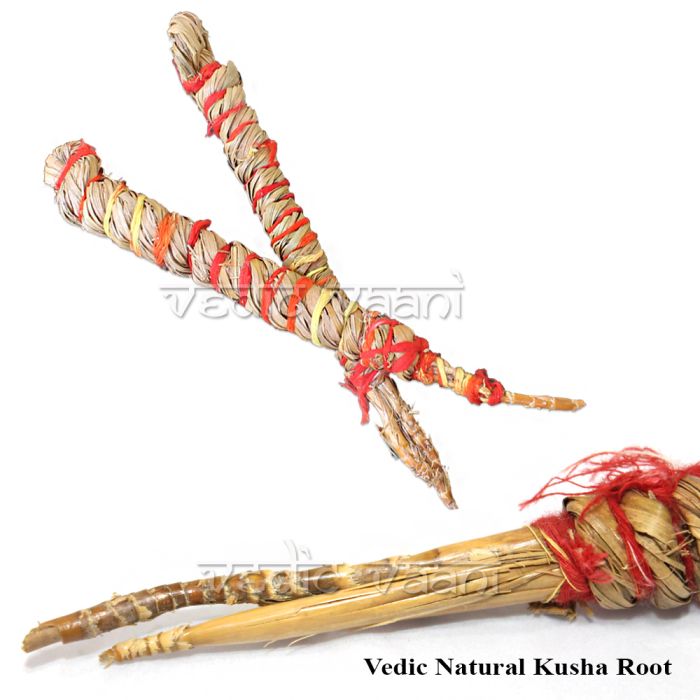 $4.09
Be the first to review this product
In stock
SKU
PI80
Quick Overview

Kusha grass is known to be the purifying object. In Kumbha poojas, the grass is used to purify different objects of worship by sprinkling holy waters using the grass. Brahmins put this grass always in their houses and use for any purificatory ritual they perform.
Quantity: 2 pcs

Set of 2 bundles of sacred Kusha grass with roots for purification, during puja or ritual ceremonies.

Kusha grass is known to be the purifying object.  In Kumbha poojas, the grass is used to purify different objects of worship by sprinkling holy waters using the grass. Brahmins put this grass always in their houses and use for any purificatory ritual they perform.

For religious purposes, it is not cut or plucked on everyday, but only on Krishna Paksha Padyami (next day after FullMoon day).

Bg 6.11 To practice Dhyan yoga, one should go to a secluded place and should lay Kusha grass on the gorund and then cover it with a deerskin and a soft cloth……

Science says about Darbha:
In recent medical research, Darbha or Kusha grass has been observed to block X-Ray radiation.  It is scientifically known as Panic grass and of genus borage species. It can grow up to 2 feet and it appears pointed at the top.

Significance of Darbha:
Kusha grass is meant to have Lord Vishnu’s potency. It is believed that this grass has immense purifying properties. It is worshipped by Vaishnavas on the special day in Bhadrapada month (August – September) called Darbhashtami.

The significance of Darbha grass is also found in Buddhist culture. It is believed that Sakyamuni Buddha sat on a Darbha mat to meditate and got enlightened under the Bodhi tree. The capital city of Malla kingdom of Buddhist is named Kushinagara, just to honor Kusha grass. It was in this city Lord Buddha was cremated.