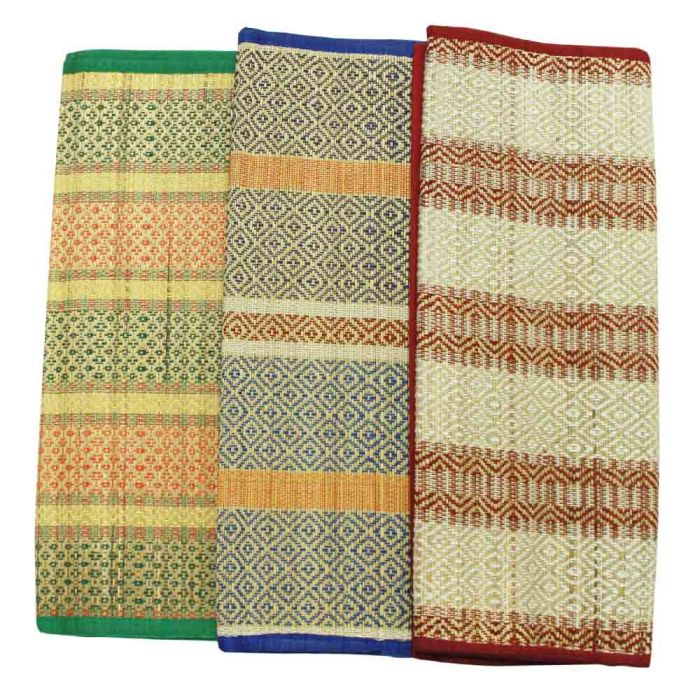 $25.00
Be the first to review this product
In stock
SKU
PI135
Quick Overview

Kusha Aasan is considered highly sacred. Sages often sit on Kusha grass mats when they do their meditation. Hand woven mats from Kusha grass, these mats are ideal as seats while doing rituals and meditation.
Dimensions: 30 X 36 inches
Weight: 430 gram
(Color and design may vary)

Kusha Aasan is considered highly sacred. Sages often sit on Kusha grass mats when they do their meditation. Hand woven mats from Kusha grass, these mats are ideal as seats while doing rituals and meditation.

A traditional type of prayer mat is the one made with grass and is called "Kush Aasana". It is said that "Kush Aasana"allows the yogi to maintain that serene state of mind without being affected by the adversity of the environment surrounding him. Kusha, whose name signifies sharp in the sense of acute,is the root for the Sanskrit word for"expert" kosala. The sanctity of dhurba,also known as kusha grass,is as old as the Indian Gods.All kind of evil forces like, ghosts, spirits, demons, etc. keep away from the place where it is used. This is considered to be the holiest of all the thirthas here, and is believed to be the spot where Gowtama Rishi finally secured Ganga on earth by spreading the Kusha or the Durva grass around her.Kusha grass is considered purifying, and rings woven of it are sometimes worn in worship to keep the hands ritually pure. It is also a remarkable insulator, both physically and metaphysically. Kusha mats can also be used with a blanket on top for sleeping on damp ground in bitterly cold weather.

The sanctity of dharba or kusha,is as old as the Indian gods. Puranas tell how Vishnu assumed the form of the Cosmic Tortoise (Skt.kurma) whose shell served to support Mandara, the mountain that served as a dasher in the churning of the Sea of Milk. As the mountain rotated, several hairs were rubbed from the tortoise's back. With time,they washed ashore and became Kusha.

Later, when the amrita (nectar) was obtained and distributed among the gods, some drops fell on the grass which further sanctified it imbuing it with healing properties. Therefore, in the tradition hair-cutting of Vaishnava toddlers, the hair is touched with kusha before it is cut. It was used as a ritual seat as far back as the Vedas, and the Bhagavad Gita (ch.6) stipulates that, covered with a skin and a cloth,it is the appropriate seat for meditation. Therefore,it was one of the first offerings made to the Buddha.