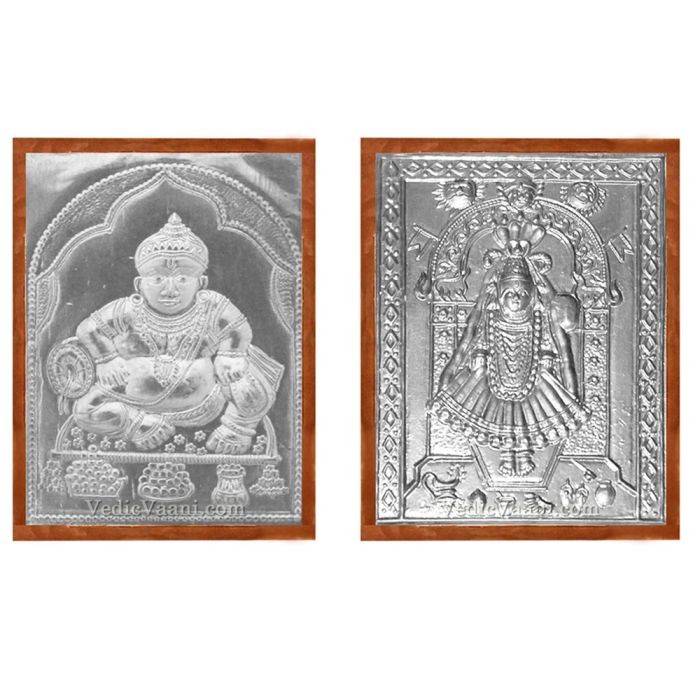 $18.18
Be the first to review this product
In stock
SKU
PF123
Quick Overview

Kuber Maharaj is the treasurer of the gods and overlord of the semi-divine Yakshas, the Guhyakas, Kinnaras and Gandharvas, who act as his assistants and protectors of the jewels of the earth, as well as guardians of his city. Kubera is also the guardian of travelers and the giver of wealth to individuals, who please him.

As the treasurer of the riches of the world, Kubera is prescribed to be worshipped. Kubera also credited money to the god Venkateshwara (a form of the god Vishnu) for his marriage with Padmavati. In remembrance of this, the reason devotees go to Tirupati to donate money in Venkateshwara's Hundi ("Donation pot"), is so that he can pay it back to Kubera. Kubera is worshipped with Lakshmi, the goddess of wealth during Diwali, which is primarily dedicated to her.

The Shri Mahalakshmi Temple of Kolhapur is one of the Shakti peetha located in Maharashtra. The various puranas of ancient India, have listed 108 shaktipeethas where Shakti (the goddess of power) is manifested.

Mahalakshmi Temple, an ancient temple in Kolhapur, is dedicated to the Goddess of prosperity Mahalaxmi, locally known as Goddess Amba Bai. This temple had been under the patronage of all the major dynasties who ruled the region and temple is revered by all the royal family members as well as populace of the region. The temple was constructed during the reign of King Karandev of Chalukya dynasty in 7th century AD i.e. around 600 to 700 A.D.

Invoke the blessings of unique Kolhapur Mahalakshmi pratima (Image) in copper by installing this pratima in your puja altar, prayer room, office cabin or living area.