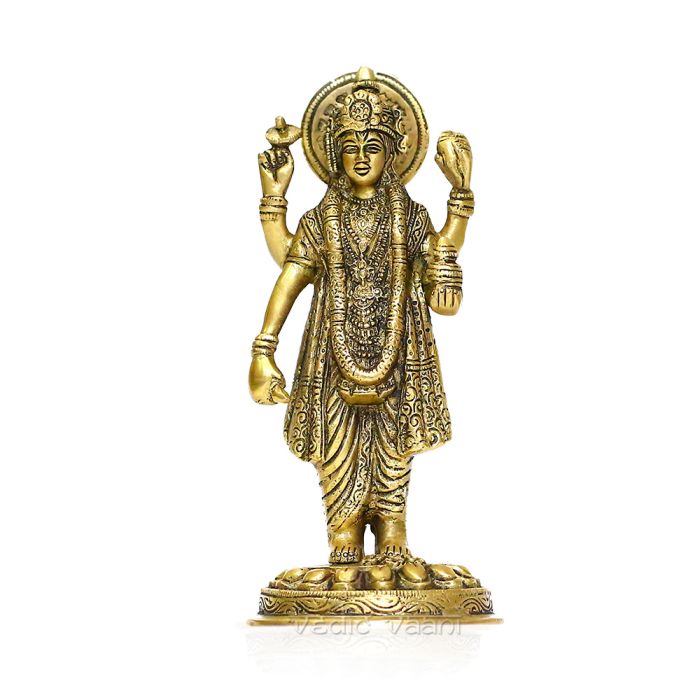 $83.45
Be the first to review this product
In stock
SKU
VZ1274
Quick Overview
Lord Dhanvantari is the 17th incarnation of Lord Vishnu. He is the god of health care.As such, persons have taken the name "Dhanvantari" in connection with their attempts at medical interventions.

Lord Dhanvantari took born in the royal household of Kashi and eventually became the king.Even as a young boy He had ascetic tendencies,was extremely disciplined and performed severe austerities. He taught Ayurveda orally to the sages and rishis (seers) who became his disciples.His teachings are recorded in the Agni Purana, as well as through the teachings of his disciples Susruta,Pauskalavata,Aurabha, Vaitarana,and others.

His birthday is celebrated by the practitioners of Ayurveda every year, on Dhanteras, two days before Deepavali, the Hindu festival of Lights.

Make: Made in brass.
Brass is well known for its grasping capacity. It grasps the divine spirit upto 30%, when compared to other metals. The spiritual vibrations are attracted towards these shining idols easily.

Importance of Idol worship: Idols are not the idle fancies of sculptors,but shining channels through which the heart of the devotee is attracted to and flows towards God. Though the image is worshipped, the devotee feels the presence of the Lord in it and pours out his devotion unto it.Regular worship, Puja and other modes of demonstrating our inner feeling of recognition of Divinity in the idol unveils the Divinity latent in it. This is truly a wonder and a miracle.The picture comes to life.The idol speaks. It will answer your questions and solve your problems.The God in you has the power to awaken the latent Divinity in the idol.The lives of Mirabai, Sant Tukaram,Shri Ramakrishna Paramhansa and Shri Yogananda are a few instances to prove the point.They proved beyond doubt that idol worship has its own brighter side and through simple faith and intense devotion one can realize God through it.
Idols are the "finite representation of the Infinite".As per Vishnu Samhita (ch 29, v 55-7), persuasively endorses the use of imagery (idols) and puts it:"Without a form how can God be mediated upon? If (He is) without any form, where will the mind fix itself? When there is nothing for the mind to attach itself to,it will slip away from meditation or will glide into a state of slumber.Therefore the wise will meditate on some form, remembering,however,that the form is a superimposition and not a reality.