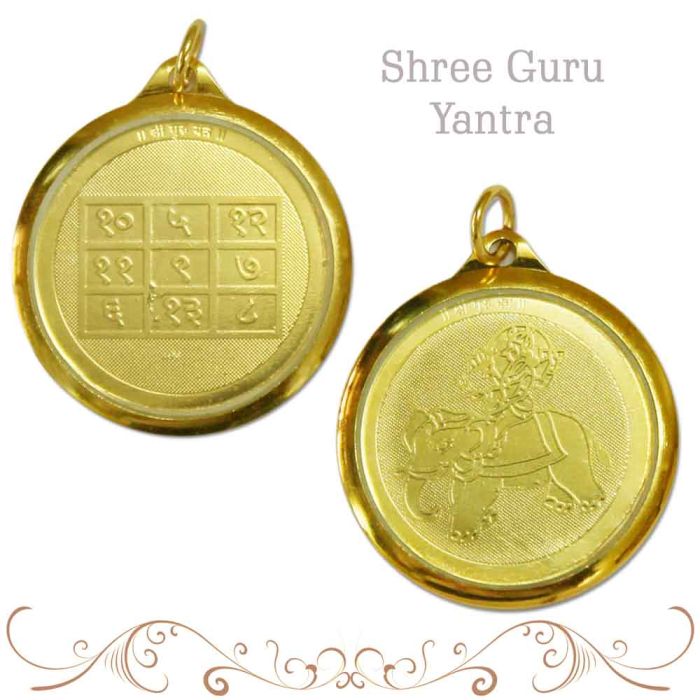 $10.27
Be the first to review this product
Out of stock
SKU
LY42
Quick Overview

Guru Yantra Locket Designed as Yantra Image on one side and Deity Image on other side which is made in Gold Plated Copper and Covered by Acrylic Glass on both the sides.
Dimensions: 32 mm (diameter) x 2 mm (thickness)
Weight: 10 gms

Guru yantra is to get blessings of Lord Jupiter for right guidance, prosperity, power, rank, authority, abundance, wealth, and success in business. It also pacifies the malefics of Jupiter planet in a person's birth chart.

Guru yantra stimulate religious interests and expands knowledge. It bestows success in every sphere of life. It improves relationships with spiritual benefactors. It works as a powerful tool guiding the worshipper at every step.

Brihaspati is the Guru of Devas, personification of piety and religion, the chief offerer of prayers and sacrifices, represented as the Purohita of the gods with whom he intercedes for men. He is the Lord of planet Jupiter. He is often known simply as "Guru". According to Hindu scriptures, he is the guru of the Devas and the arch-nemesis of Shukracharya, the guru of the Danavas. He is also known Guru, the god of wisdom and eloquence, to whom various works are ascribed, such as the "atheistic" Barhaspatya sutras. Guru is usually depicted with an elephant or chariot drawn by eight horses as his vehicle. He is described of yellow or golden colour and holding a stick, a lotus and his beads. He presides over 'Guru-var', Brihaspativar or Thursday. He is of Sattva Guna and represents knowledge and teaching. His Tattva or element is Akasha or ether, and his direction is north-east.