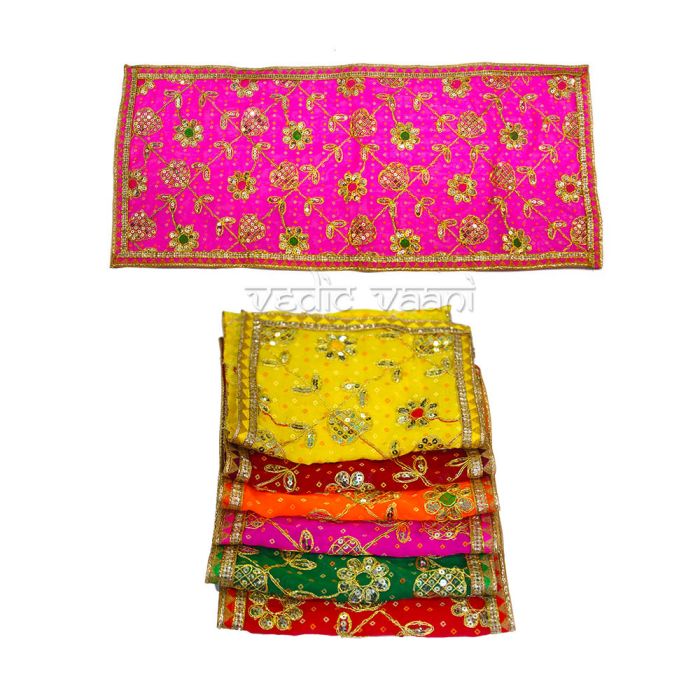 $7.82
Be the first to review this product
In stock
SKU
AZ1214
Quick Overview
Bandhani is a type of tie-dye practiced mainly in the states of Rajasthan and Gujarat, India. The term bandhani is derived from the Sanskrit word 'banda' meaning 'to tie'.

Bandhani is a type of tie-dye practiced mainly in the states of Rajasthan and Gujarat, India. The term bandhani is derived from the Sanskrit word 'banda' meaning 'to tie'. The art of Bandhani is highly skilled process. The technique involves dyeing a fabric which is tied tightly with a thread at several points,thus producing a variety of patterns like dots, squares, waves and strips.

Chunri is an integral part of festivities. It is draped on head and shoulders like a scarf by women during religious functions, ceremonies and prayer rituals. It is draped around deity Idols and altars and thus made from auspicious colors. Often a chunri is used in altar as a seat for Idols and yantras and for adding color and festivity to the prayer room.

Offering the Chunri to Devi or Goddess or any deity is a age old tradition which signifies respect towards the deities. Chunri is also laid down before installing a deity idol. The Chunri is laid on a pedestal and then the deity idol is installed on top of it. Covering the top part of the Goddess statue and photo is also a widely practiced tradition.

Design: Made of soft cloth with zari design and golden border.