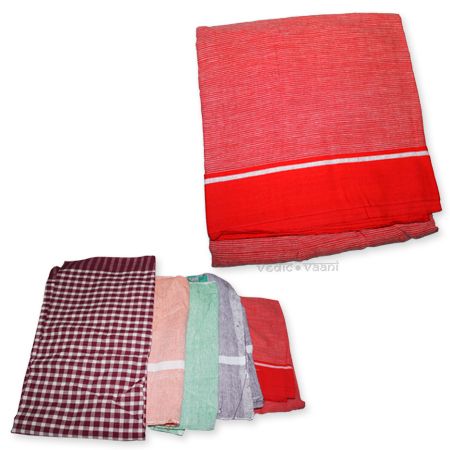 $4.45
Be the first to review this product
In stock
SKU
AC04
Quick Overview

Gamchha is a traditional Indian towel made up of thin coarse cotton fabric.Although it is normally used for drying one's body after bathing, gamcha serves other purposes also.It forms an important item of men's clothing.

The term'Gamchha' originates from the Bangla language and it means'Wiping the Body'.You may also hear it being pronounced as gamchi by people of the Bihari community. The gamocha is used by the wearer in many ways. For instance,the coolies make a bun out of the traditional gamcha,which they keep on their head to carry the railway passenger's luggage.

Farmers keep the gamchha on their shoulders to wipe away the sweat while toiling in the scorching sun,the whole day long.Sometimes,they also spread it out on the ground like a mat and take a nap on it.In ancient India, travelers used the gamocha to carry food in it while journeying.It also forms one of the essential items offered to Indian deities during religious ceremonies.Perhaps, the best thing about a gamchha is that being thin,it does not take long to dry and thus can be used many times during a day.

A mix of checks and stripes in red,orange and green is the most common print of the Indian gamcha,though a white gamchha is also not uncommon.Plain white gamchhas with colored, embroidered or printed borders are very popular in the states of Orissa and Assam.Here,they are made by the local weavers on the handlooms.Despite the availability of branded fancy towels in the market,the gamcha still remains a very popular item of a man's personal use.