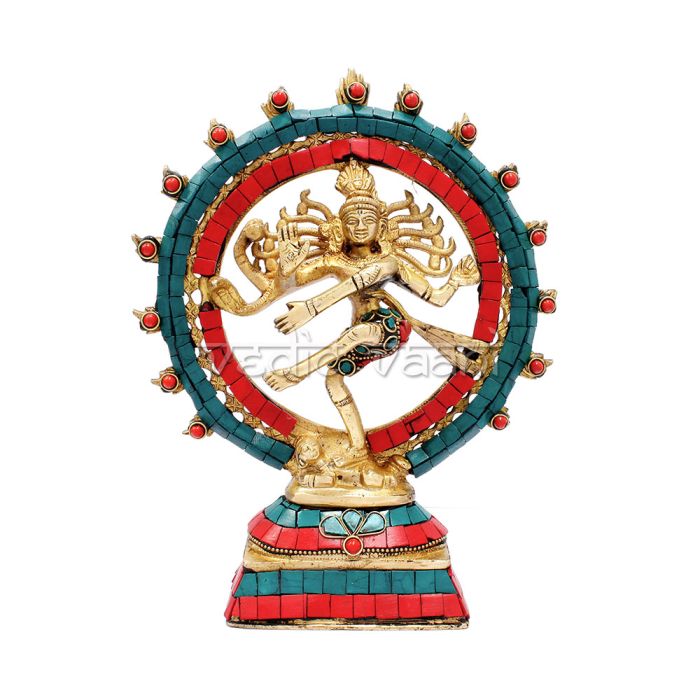 $99.09
Be the first to review this product
Out of stock
SKU
AZ969
Quick Overview
The gestures of the dance represent Shiva's five activities (pancakritya): creation (symbolized by the drum), protection (by the pose of the hand), destruction (by the fire), embodiment (by the foot planted on the ground), and release (by the foot held aloft).

Nataraja is derived from the Sanskrit words narta rajan "lord of dance". Shiva is shown as the source of all movement within the cosmos. The purpose of the dance is to release humans from illusion, and the place where it is said to have been performed, Chidambaram (an important Shaiva centre in South India), called the centre of the universe, is in reality within the heart. The gestures of the dance represent Shiva's five activities (pancakritya): creation (symbolized by the drum), protection (by the pose of the hand), destruction (by the fire), embodiment (by the foot planted on the ground), and release (by the foot held aloft).

Shiva was first depicted as Nataraja in the famous Chola bronzes and sculptures of Chidambaram. The Natraja form of Lord Shiva combines in a single image Shiva's roles as creator,preserver, and destroyer of the universe and conveys the Indian conception of the never-ending cycle of time. Shiva dancing in an aureole of flames, lifting his left leg and balancing over a demon or dwarf (Apasmara) who symbolizes ignorance. The god holds in his upper right hand the damaru (hand drum that made the first sounds of creation). His upper left hand holds agni(the fire that will destroy the universe). With his lower right hand, he makes abhayamudra (the gesture that allays fear). Shiva's front left hand, pointing to his raised left foot, signifies refuge for the troubled soul. The energy of his dance makes his hair fly to the sides. The symbols imply that,through belief in Shiva, his devotees can achieve salvation.

Dimensions: 9 inches (H) x 7.5 inches (W)
Weight: 1.6 kgs approx
Make: Made in brass by our best artisan.
Brass is well known for its grasping capacity.It grasps the divine spirit upto 30%, when compared to other metals.The spiritual vibrations are attracted towards these shining idols easily.