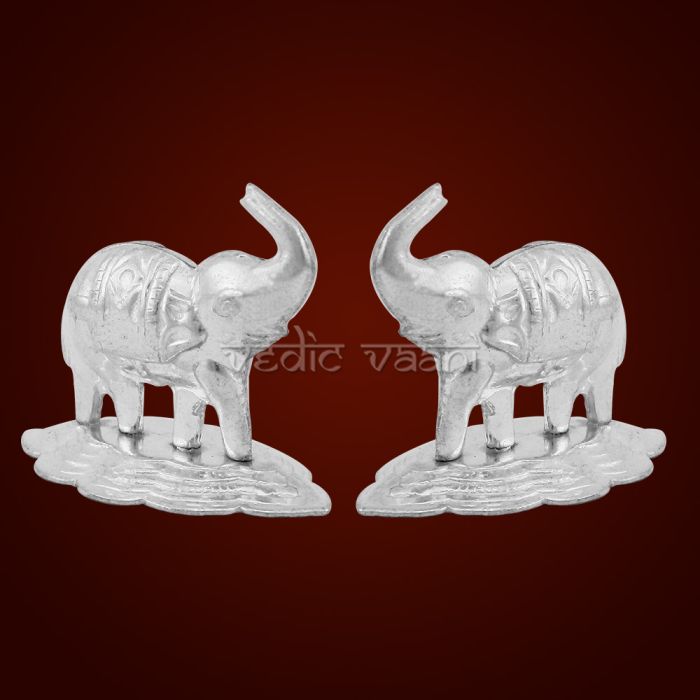 $51.82
Be the first to review this product
In stock
SKU
BBS33
Quick Overview

The Elephant showpiece idol is beautifully designed in sterling silver with glitter finish. This Peacock idol is used decorations for the home, temple and Pooja room, an ideal gift for your loved ones.

The Elephant showpiece idol is beautifully designed in sterling silver with glitter finish. This Peacock idol is used decorations for the home, temple and Pooja room, an ideal gift for your loved ones.

The elephant is endowed with peculiar qualities, like its fearless and royal walk. It proudly destroys any obstacle on its path. An elephant is also a symbol of authority, endurance, strength and courage. The long trunk of the elephant symbolizes that true enlightenment is a good balance between knowledge and its implementation (in action). One of the nine jewels that emerged from 'samudra manthan' churning of the ocean by the gods and demons was the elephant.

The elephant has special qualities. It has an enormous head, which signifies Knowledge and Wisdom, it has large ears that fan, small eyes which convey that it is wiser to follow that which you hear and understand rather than to follow appearances. So what you see must be co-related with what you hear. Also the elephant used its trunk for dual functions, it smells and acts through its trunk. Likewise in wisdom we smell and then act. With the merest hint of something (like smelling smoke, of course!), a wise person will take immediate action, that is the wise act as soon as they smell something. The elephant also possesses tusks that are visible for all to see while its teeth for grinding purposes are not as they are in its mouth.

And then comes the greatest of all vahanas (carriages for Gods) - the Airavat (elephant). The Airavat was the chosen carriage for the God of all Gods Indra. There were other Gods as well riding on elephants as well, but Indra's airavat was special. It was regal in size and had ten tusks, not just the usual two. A white elephant is rare and given special significance. It is often considered sacred and symbolises royalty, and is also considered a symbol of good luck.