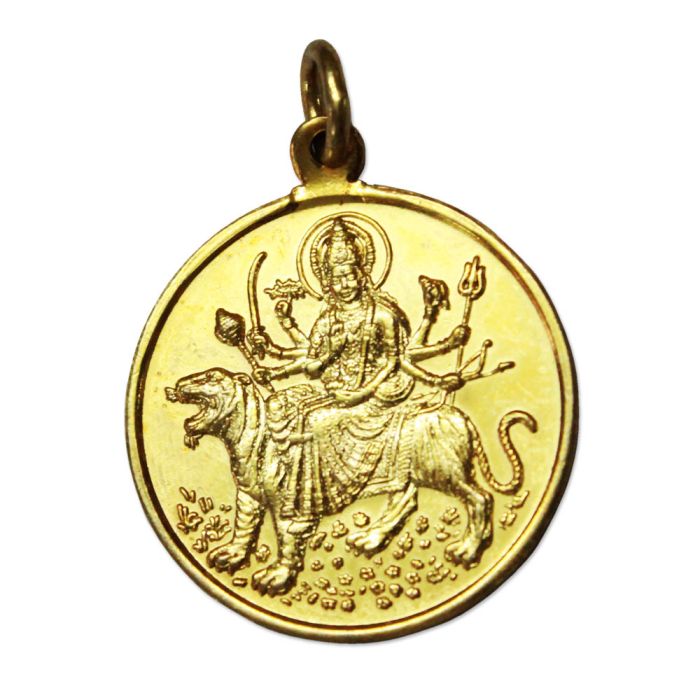 Durga yantra gives victory in all your endeavors.It helps to conquer your enemies and win over your rivals.The Durga yantra removes all the obstacles and paves the way to success.

Goddess Durga is the mother of the universe and believed to be the power behind the work of creation, preservation, and destruction of the world.Since time immemorial She has been worshipped as the supreme power of the Supreme Being and has been mentioned in many scriptures - Yajur Veda,Vajasaneyi Samhita and Taittareya Brahman.

Durga, in Sanskrit means "She who is incomprehensible or difficult to reach."Goddess Durga is a form of Shakti worshiped for her gracious as well as terrifying aspect.Mother of the Universe, she represents the infinite power of the universe and is a symbol of a female dynamism.The manifestation of Goddess Durga is said to emerge from Her formless essence and the two are inseparable.

Goddess Durga exists eternally,always abiding in her own sweet nature and inhabits the hearts and minds of her ecstatic devotees. As Shakti power, she shapes, nurtures, and dissolves names and forms,while as subtle spiritual energy called Kundalini,She lights the lotuses for the seven centres of awareness in the sacred human body.When demonic forces create imbalance all Gods unite becoming one divine force called Shakti or Durga.

Goddess Durga symbolizes the divine forces (positive energy) known as divine shakti (feminine energy/power) that is used against the negative forces of evil and wickedness. She protects Her devotees from evil powers and safeguards them. It is believed that Goddess Durga is the combined form of powers of Goddesses Lakshmi, Kali and Saraswati.Goddess Durga was created by Lord Vishnu as a warrior goddess to protect demi-gods (devas), to fight against the demon, Mahishasur.Her divine shakti contains the combined energies of all the gods in the form of weapons and emblems (mudras).

The locket has yantra image on one side and deity image of the other side. The yantra would be blessed and energized.