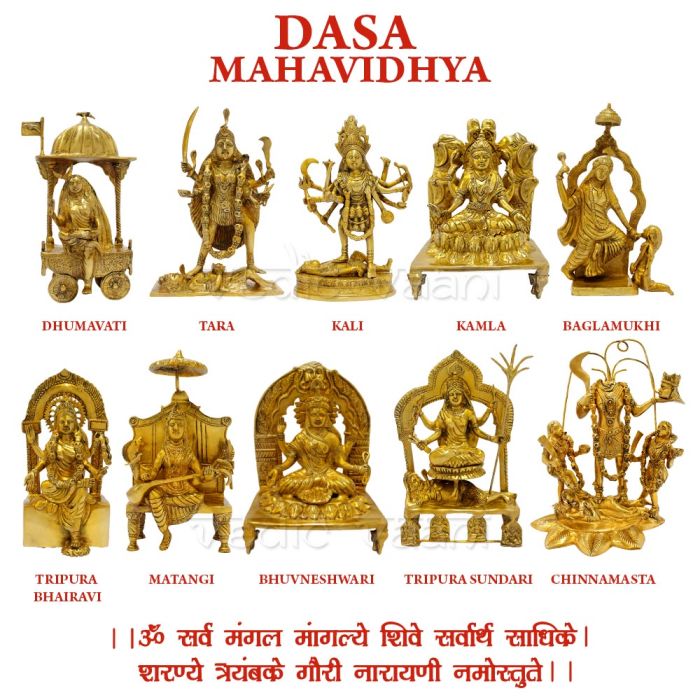 Around her neck Kali wears a necklace of skulls. All appearances to the contrary, this is a symbol of creative power. It is the varnamala, the garland of letters. Each skull represents a sound of the Sanskrit alphabet, a particular manifestation of energy. Physics tells us the same thing—that the universe is nothing but energy, vibrating at different frequencies and levels of intensity, and the result is this palpable world of name and form. The imagery of the skulls also reminds us that all created things pass away. Vibration is movement, and everything in the universe is constantly changing. Change is not possible except for time, and Kali is also time, the relentless devourer that in the end swallows up all things.

TARA - In the succession of Mahavidyas, Tara comes second, immediately after Kali, whom she closely resembles. Just as Kali herself has many different aspects, so does Tara. Tara is prominent both in Tibetan Buddhism and in Tantric Hinduism, and her many aspects include forms that are either gentle (saumya) or fierce (ugra). The Hindu Sakta Tantra seems to prefer the fierce forms.

So close are the representations of Tara and Kali that often their identities blur. Of course, divinity is a single reality, and that has been proclaimed from the time of the Rigveda onward: “Truth is one; the wise call it by various names.” The recitations of Kali’s and Tara’s thousand names (sahasranama hymns) have many names in common. Not only that, Ramprasad, in his great devotional songs, used the names Kali and Tara interchangeably.

LALITA TRIPURA Sundari – Tripurasundari is sometimes spoken of as an adimahavidya, or primordial wisdom goddess, which puts her in the company of Kali and Tara as representing one of the highest experiences of reality. She is not the ultimate, absolute, or nirguna state devoid of all qualities; still, she represents the experience of consciousness in a high state of divine universality.

Her other names include Sodasi, Lalita, Kamesvari, Srividya, and Rajarajesvari. Each of these emphasizes a particular quality or function.

BHUVANESHWARI - The fourth Mahavidya is Bhuvanesvari, whose form closely resembles that of Tripurasundari. Even more than the goddess who is beautiful in the three worlds or transcends them, Bhuvanesvari is identified with the manifest world and our experience of it.

Her name consists of two elements: bhuvana, which means this living world—a place of dynamic activity—and isvari, which means the female ruler or sovereign. The name Bhuvanesvari is most often translated as “Mistress of the World,” but bhuvana is more than the earth we stand upon. It is the entire cosmos, the bhuvanatraya, consisting of the heavens, the atmosphere, and the earth. Because this is a living, dynamic phenomenon, Bhuvanesvari embodies all its characteristics and their interactions.

CHINAMMASTIKA - Chinnamasta (“she who is decapitated”) is a form of the Divine Mother shown as having cut off her own head. The blood that spurts from her neck flows in three streams—one into her own mouth and the others into the mouths of her two female attendants, Dakini and Varnini. At the same time, Chinnamasta she stands on the body of another female figure who is copulating with a male who lies beneath her.

This image may be shocking at first, but in fact it symbolizes sublime spiritual truths, and each feature of the iconography has an important point to make.

BHAIRAVI - The name Bhairavi means “frightful,” “terrible,” “horrible,” or “formidable.” The basic idea here is fear. Ordinarily we associate fear with darkness. It is not uncommon to be afraid of the dark, or rather of the dangers that lurk there unseen, but that is not the sort of fear that Bhairavi provokes, for she is said to shine with the effulgence of ten thousand rising suns.

DHUMAVATI - If Bhairavi represents overwhelming brilliance, Dhumavati personifies the dark side of life. We know from our own experience that life can be exhilarating, joyful, and pleasant—something we want to embrace and live to the fullest. But at other times we find that this same life can be depressing, sorrowful, painful, and frustrating. At such moments we respond with pessimism, sadness, anxiety, or anger. It is then that we no longer want to embrace life but rather to avoid its misery.

BAGALAMUKHI - Is the one whose meaning is the most elusive. Her symbology varies widely, and its interpretation shows little consistency. The opinions of one informant often bear little relation to those of another, and even while making spiritually valid points they can seem rather arbitrary and disconnected. There is no satisfactory explanation even for Bagalamukhi’s name. The word bagala is not found in the Sanskrit lexicon, and attempts to link it to baka (“crane”) are less than convincing.

MATANGI - At first glance Matangi looks very much like Sarasvati. The main point of similarity is the vina that she plays. Like Sarasvati, she may be shown holding a book and a japamala as well. Together these symbolize the interrelated aspects of sound, knowledge, and power. The sound of the vina represents creativity, which is the power of consciousness to express itself. The mala also represents the power of sound, but in the form of the mantra. The book stands for the wisdom and knowledge transmitted through the word. The parrot that accompanies Matangi also has associations with speech.

It is a well-known truism that knowledge is power. Our own experience verifies that the more we know about something, the greater will be our ability. The more we understand how something works, the better we will be able to make it work to our advantage. This fact underlies every acquired skill relating to any field of learning and any form of technology. It follows that the more we know about the internal instrument that is the mind (antahkarana), the more mastery we will gain over it also.

KAMALA - The series of ten Mahavidyas begins with Kali and ends with Kamala. Both are aspects of the Divine Mother who are widely worshiped in their own right apart from the context of the Mahavidyas. In this way they differ from aspects such as Dhumavati, Bagalamukhi, and Matangi, who lack similar independence and a widespread popular following.

One way of analyzing the Mahavidyas places Kali first because she represents the transcendental experience. This same scheme places Kamala last as the aspect most closely connected to the here and now. The error here is to regard Kali and Kamala as separate. In truth, the Divine is one, and the enlightened soul perceives unity, not difference.

Make: Made in heavy shining brass.
Brass is well known for its grasping capacity. It grasps the divine spirit upto 30%, when compared to other metals. The spiritual vibrations are attracted towards these shining idols easily.