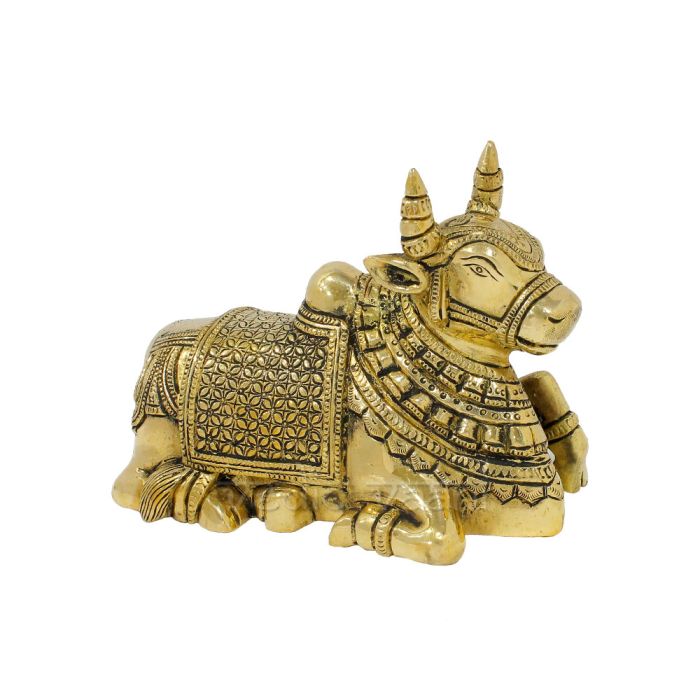 $115.91
Be the first to review this product
In stock
SKU
AZ967
Quick Overview
Lord Shankar (Shiv ji) always travels on Nandi, hence Nandi is Called the Vahan of Lord Shiva. Nandi is considered to be one of Shiva's chief attendants and occasionally is depicted in sculpture as a bull-faced dwarf figure. The Nandi Statue is hugely popular among Lord Shiva devotees.

Lord Shankar (Shiv ji) always travels on Nandi, hence Nandi is Called the Vahan of Lord Shiva. Nandi is considered to be one of Shiva's chief attendants and occasionally is depicted in sculpture as a bull-faced dwarf figure. The Nandi Statue is hugely popular among Lord Shiva devotees.

Importance of Idol worship: Idols are not the idle fancies of sculptors, but shining channels through which the heart of the devotee is attracted to and flows towards God. Though the image is worshipped, the devotee feels the presence of the Lord in it and pours out his devotion unto it.Regular worship,Puja and other modes of demonstrating our inner feeling of recognition of Divinity in the idol unveils the Divinity latent in it.This is truly a wonder and a miracle.The picture comes to life.The idol speaks. It will answer your questions and solve your problems.The God in you has the power to awaken the latent Divinity in the idol.The lives of Mirabai, Sant Tukaram,Shri Ramakrishna Paramhansa and Shri Yogananda are a few instances to prove the point.They proved beyond doubt that idol worship has its own brighter side and through simple faith and intense devotion one can realize God through it.
Idols are the "finite representation of the Infinite".As per Vishnu Samhita (ch 29, v 55-7), persuasively endorses the use of imagery (idols) and puts it:"Without a form how can God be mediated upon? If (He is) without any form, where will the mind fix itself? When there is nothing for the mind to attach itself to,it will slip away from meditation or will glide into a state of slumber.Therefore the wise will meditate on some form, remembering,however,that the form is a superimposition and not a reality."
More Information
Reviews
0
Rating:
0% of 100
Reviews
Write Your Own Review
Suggestion
Sign in with Facebook
Sign in with Google
Sign in with Twitter