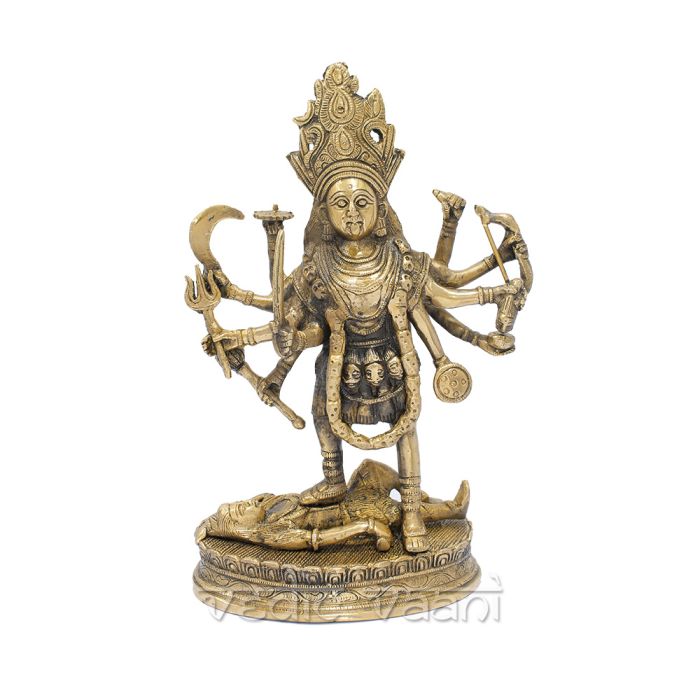 $190.91
Be the first to review this product
In stock
SKU
AZ1061
Quick Overview
Kaali comes from the Sanskrit root word Kaal which means time.There is nothing that escapes the all-consuming march of time. Kali is represented as the consort of Lord Shiva,on whose body she is often seen standing.

Kaali comes from the Sanskrit root word Kaal which means time.There is nothing that escapes the all-consuming march of time. Kali is represented as the consort of Lord Shiva,on whose body she is often seen standing.Shiva lies in the path of Kali,whose foot on Shiva subdues her anger.She is the fierce aspect of the goddess Durga.Kali's association with darkness stands in contrast to her consort, Shiva, who manifested after Her in creation,and who symbolises the rest of creation after Time is created.

As per the legends, Goddess Kali, becoming drunk on the blood of Her victims on the battlefield, dances with destructive frenzy.In her fury, She fails to see the body of Shiva,who lies among the corpses on the battlefield and steps on His chest. Realizing Shiva to lie beneath her feet, Her anger is pacified and She calms Her fury. The 'Devi-purana", which goes into great depths about Goddess Kali,reveals the true reason for the symbolism of the tongue. The characteristic icons that depict Kali are the following; unbridled matted hair,open blood shot eyes,open mouth and a drooping tongue;in her hands,she holds:a Khadga (bent sword or scimitar) and a demon head, and an enchanted Shiva lies beneath Her feet. Each of these icons represent a deep philosophical epithet.The drooping out-stuck tongue represents her blood-thirst.Lord Shiva beneath her feet represents matter, as Kali is undoubtedly the primeval energy. The depiction of Kali on Shiva shows that without energy, matter lies "dead". In tantric contexts, the tongue is seen to denote the element (guna) of rajas (energy and action) controlled by sattva.