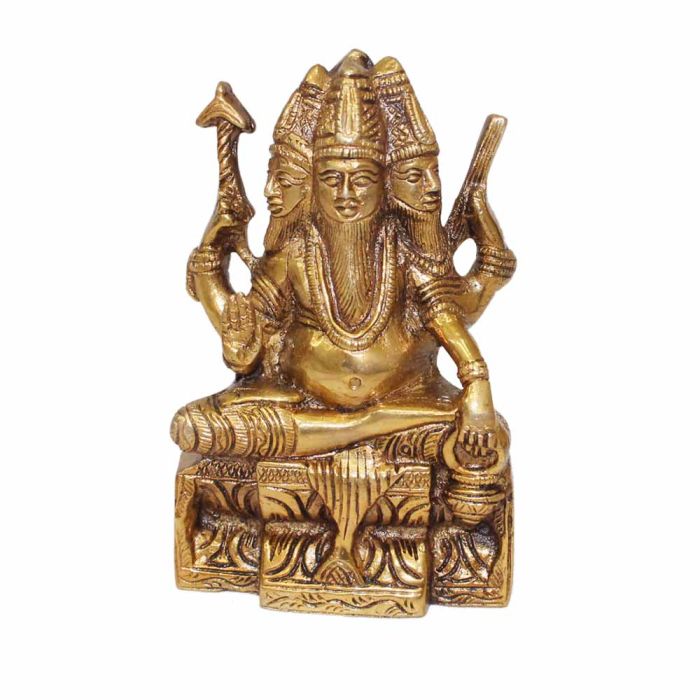 Brahma in Brass with Exotic Finish

$53.45
Be the first to review this product
In stock
SKU
BA66
Quick Overview

Brahma is the creator of the universe and of all beings, as depicted in the Hinduism. The Vedas, the oldest and the holiest of Hindu scriptures, are attributed to Brahma, and thus Brahma is regarded as the father of Dharma. Although Brahma is one of the Trinity, His popularity is no match to that of Vishnu and Shiva. Brahma is to be found to exist more in scriptures than in homes and temples. In fact it is hard to find a temple dedicated to Brahma. One such temple is located in Pushkar in Rajasthan.

The Birth of Brahma :
According to the Puranas, Brahma is the son of God, and often referred to as Prajapati. The Shatapatha Brahman says that Brahma was born of the Supreme Being Brahman and the female energy known as Maya. Wishing to create the universe, Brahman first created the water, in which He placed His seed. This seed transformed into a golden egg, from which Brahma appeared. For this reason Brahma is also known as Hiranyagarbha. According to another legend, Brahma is self-born out of a lotus flower which grew from the navel of Vishnu. According to the Brahma Putra, he is the father of Manu, and from Manu all human beings are descended. In the Ramayana and the Mahabharata, he is often referred to as the progenitor or great grandsire of all human beings.

Brahma is traditionally depicted with four heads, four faces, and four arms. With each head, He continually recites one of the four Vedas. He is often depicted with a white beard, indicating the nearly eternal nature of his existence. Unlike most other gods, Brahma holds no weapons. One of his hands holds a scepter. Another of his hands holds a book. Brahma also holds a string of prayer beads called the 'akshamala' (literally "garland of eyes"), which He uses to keep track of the Universe's time. He is also shown holding the Vedas.

Lord Brahma and Goddess Saraswati bless with creativity and knowledge to solve mankind's woes. Lord Brahma is worshipped for the divine knowledge of the Vedas and aligning with the eternal truth.

Brahma presides over 'Brahmaloka,' a universe that contains all the splendors of the earth and all other worlds. In Hindu cosmology the universe exists for a single day called the Brahmakalpa. This day is equivalent to four billion earth years, at the end of which the whole universe gets dissolved. This process is called pralaya, which repeats for such 100 years, a period that represents Brahma's lifespan. After Brahma's "death", it is necessary that another 100 of his years pass until he is reborn and the whole creation begins anew.

Design: Made in heavy shining brass.
Brass is well known for its grasping capacity. It grasps the divine spirit upto 30%, when compared to other metals.  The spiritual vibrations are attracted towards these shining idols easily.

Idols are the "finite representation of the Infinite".  As per Vishnu Samhita (ch 29, v 55-7), persuasively endorses the use of imagery (idols) and puts it:
"Without a form how can God be mediated upon? If (He is) without any form, where will the mind fix itself? When there is nothing for the mind to attach itself to, it will slip away from meditation or will glide into a state of slumber. Therefore the wise will meditate on some form, remembering, however, that the form is a superimposition and not a reality."