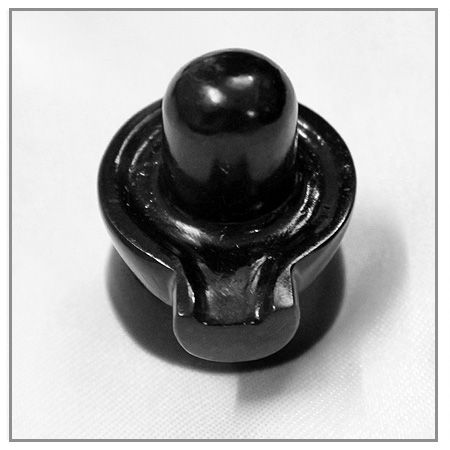 Shivling carved out of natural black agate gemstone. Agate has a lower intensity and vibrates to a slower frequency than other stones, but is highly regarded as a stabilizing and strengthening influence.
Dimensions: 2.5 inches (H) x 2.5 inches (L) x 1.25 inches (B)  (4 x 3 x 3 cms approx)
Weight: 195 grams

Agate has a lower intensity and vibrates to a slower frequency than other stones, but is highly regarded as a stabilizing and strengthening influence. Agate is excellent for balancing emotional, physical and intellectual energy, and in harmonizing yin and yang, the positive and negative forces of the universe. Agate stops the burning desires for things we do not need, and assists those juggling commitments or multiple jobs. Agate also promotes marital fidelity. Agate promotes inner stability, composure, and maturity. It’s warm, protective properties encourage security and self-confidence.

Shivaling has three distinct parts which are considered as portions of Brahma, Vishnu and Shiva. The lower part represents Brahma, the middle Vishnu and the upper and the most prominent represents Shiva. Thus, Shivling represents all the three powers in one- as the Param Braham or Supreme Shiva. Another interpretation considers Shivling to be divided in two parts – Shiva and Shakti. The top part is considered Shiva and the yoni is considered to be Shakti.