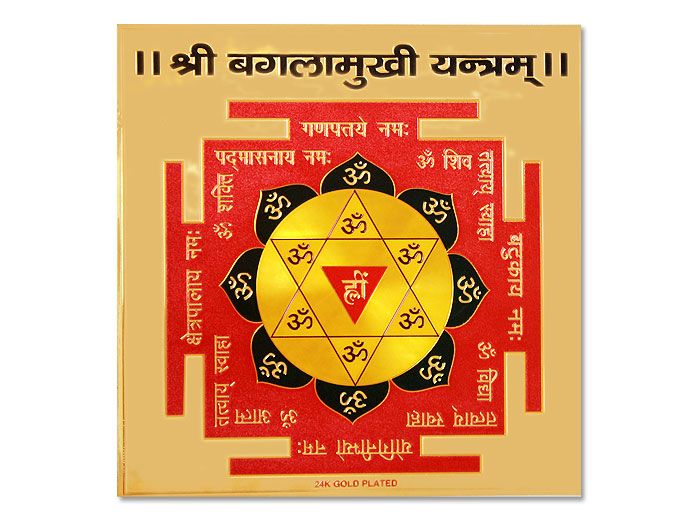 $10.27
Be the first to review this product
In stock
SKU
MY32
Quick Overview

Baglamukhi Yantra is the residence of Maa Baglamukhi.Baglamukhi yantra is very powerful and useful yantra for victory over enemies, law suits, success in quarrels and competitions.The presiding deity goddess Baglamukhi is the controller of this powerful yantra which charges yantra with occult forces. This Yantra also offers protection for cuts, scars, operations and accidents. It is very effective to ward off the evil effects of souls and yakshani and also to get success in gambling.

The worship of this yantra is performed in a particular star and moment when there is maximum power generated from the planet MARS, by wearing yellow dress, on yellow asana, with yellow flowers and yellow beads.Baglamukhi yantra is effective as a memo of achieving success over enemies.

Bagalamukhi is the eighth Mahavidya in the famous series of the 10 Mahavidyas.She is identified with the second night of courage and is the power or Shakti of cruelty.She is described as the Devi with three eyes, wearing yellow clothes and gems, moon as her diadem, wearing champaka blossoms, with one hand holding the tongue of an enemy and with the left hand spiking him, thus should you meditate on the paralyser of the three worlds. Seated on the right of Bagala is the Maharudra, with one face, who dissolves the universe.

Through worship of Baglamukhi yantra, a person emerges victorious in every field of life. All his enemies are defeated and he attains to fame, respect, power and high position in life.Not just this he gains supreme knowledge due to which he can speak eloquently on any subject. His arguments and statements leave even the greatest of scholars of a subject speechless.A magnetism develops in his personality and others are easily captivated by him.

Design: Made on thick golden paper sheet. Relevant colors are used which amplify the power of the yantra.
Mantra: Om Hreem Bagalamukhi Namaha

How to use Baglamukhi Yantra?
1. Place the Yantra facing the North East direction of your house or in puja altar.
2. Offer daily incense to the yantra.
3. Offer sindoor (vermilion) in the center of the Yantra.
4. Offer Prasada (sweet offerings) to the yantra.
5. Chant the Mantra of the Yantra, minimum 11 times.
6. Consume the Prasada.‹