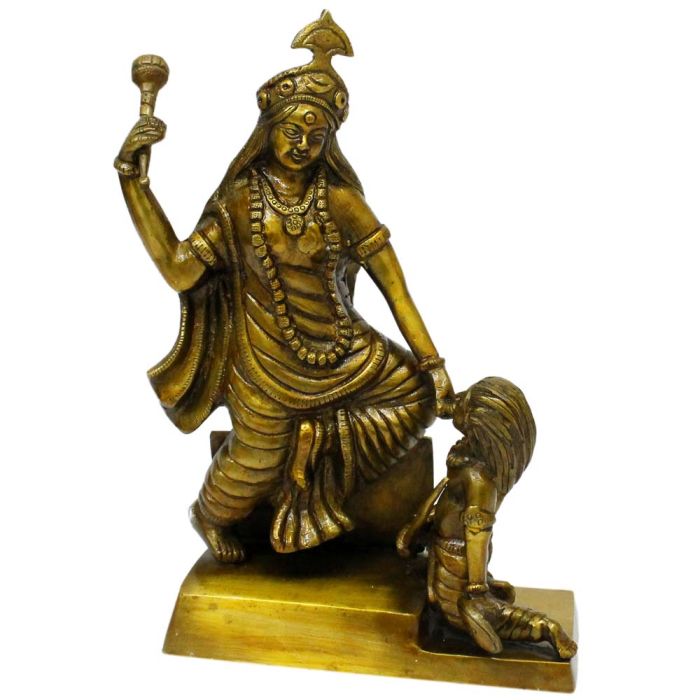 $352.27
Be the first to review this product
In stock
SKU
BA83
Quick Overview

Bagalamukhi" is derived from "Bagala" (distortion of the original Sanskrit root "valg") and "mukha", meaning "bridle" and "face", respectively. Thus, the name means one whose face has the power to capture or control. She thus represents the hypnotic power of the Goddess. Another interpretation translates her name ascrane faced.

Bagalamukhi is the goddess of black magic of poisons. She rules over the subtle perception which make us feel at a distance the death or misery of those we know. Bagala or Bagalamukhi is the eighth Mahavidya in the famous series of the 10 Mahavidyas Kali, Tara, Shodashi, Bhuvaneshvari, Chinnamasta, Bhairavi, Dhumavati, Bagala, Matangi and Kamala. she is identified with the second night of courage, according to Alain Danielou in his Hindu Polytheism, and is the power or Shakti of cruelty.

Baglamukhi is identified with the second night of courage and is the power or Shakti of cruelty. She is described as the Devi with three eyes, wearing yellow clothes and gems, moon as her diadem, wearing champaka blossoms, with one hand holding the tongue of an enemy and with the left hand spiking him, thus should you meditate on the paralyser of the three worlds. Seated on the right of Bagala is the Maharudra, with one face, who dissolves the universe. Bagalamukhi means "The Crane-Headed One". This bird is thought of as the essence of deceit. She rules magic for the suppression of an enemy's gossip. She rules deceit which is at the heart of most speech. She can in this sense be considered as a terrible or Bhairavi form of Matrika Devi, the mother of all speech.

The worship of Baglamukhi who is also famous as 'Pitambara Vidya' (yellow Color is prominently used in her worship) for protection against the enemies and to defeat them, to get victory in the legal matters, to acquire wealth, to clear away the debts and to attain power of oratory etc.
In her worship yellow clothes, garland made of turmeric; yellow seat and yellow flowers are used. She is the presiding goddess who has a desire of annihilating the demons in her individual form ‹.