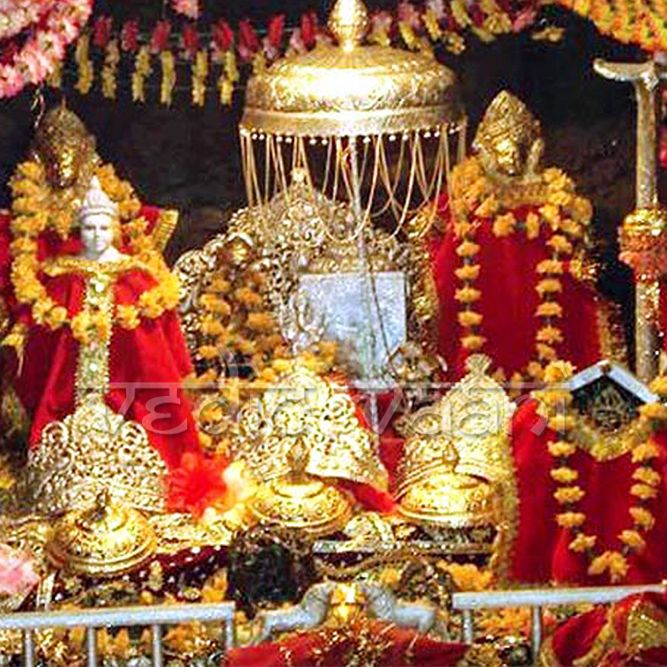 $563.64
Be the first to review this product
In stock
SKU
PS163
Quick Overview

Vaishno Devi temple is near the town of Katra at Jammu Kashmir and is dedicated to Shakti. It is the second most visited pilgrimage in India and thousands of devotees visit daily from across the world to seek blessings from Maa Vaishnavi. She is also known as "Mata Rani" and "Maa Vaishnavi".

Vaishno Devi temple is near the town of Katra at Jammu Kashmir and is dedicated to Shakti. It is the second most visited pilgrimage in India and thousands of devotees visit daily from across the world to seek blessings from Maa Vaishnavi. She is also known as "Mata Rani" and "Maa Vaishnavi".

Goddess Vaishnavi is considered to be incarnation of combined Shakti or power of the Goddess Saraswati, Goddess Lakshmi and Goddess Kali. The main reason of birth of Vaishno Devi was the destruction of demons from the earth. The divine girl was born to a man called Ratnakar who named her Vaishnavi.

Vaishnavi left her house at a very tender age of nine to perform mediatation and went to deep forests at the Trikuta hills to observe penance. Lord Rama came to Trikuta hills in the search of Sita with his army and eventually met her. Vaishnavi recognized him as the incarnation of Lord Vishnu and asked him to marry her. But Lord Ram on being faithful to his wife, told her that this is not the appropriate time for the same and he would marry her in Kaliyuga in the avatar of Lord Kalki. He asked her to mediate to increase her spiritual powers. As directed by Lord Rama, she built an Ashram at Trikuta and started her meditation to seek answers within herself.

Soon, a man called BhairoNath came to know about her and when he saw her, he was really impressed by her divinde beauty. He started to pester her to marry him. Vaishnavi decided to run away to jungles to evade him. After long time of this hide and seek, she confronted him on the entrance of a cave and beheaded him. Bhaironath realised his mistake after death and asked for the forgivness from Mata Vaishnavi . He was forgiven by the Goddess and was blessed that every devotee who comes to worship her will also have to visit the temple of Bhairon Nath without which their Vaishno Devi yatra will remain incomplete. Mata Vaishnavi then left her body, become a rock statue and went into meditation for long lasting era.

Please mention your birth details (name, date, place, time), & Sankalp (your wish) at Email: [email protected] This is a individual Puja (you may do puja on individual name or include your near and dear ones in the puja). You will be provided with the contact no. of the priest, to call during the Sankalpa/Puja. The Puja prasad will be sent to you through courier. Know more about our exclusive Puja Services